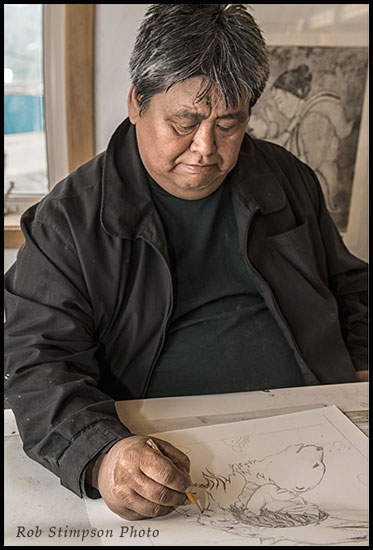 Name:
Andrew Qappik (1964 – ), RCA
Gender:
Male
Style:
Inuit
Region:
Pangnirtung, Nunavut, Canada
Born in 1964 in Nunataq, a camp about 40 miles from the east Baffin Island settlement of Pangnirtung, he moved with his parents into the community when he was a young child. When a printmaking workshop was established in the hamlet in 1973, young Andrew watched the experienced artists, especially his uncles Solomon and Imoona Karpik, who encouraged him to create his own drawings.

Qappik’s prints depicts both animals and traditional Inuit culture, which he has learned about from his own experience and stories by his grandfathers and other relatives. Some of these relatives have been an influence on Qappik’s artistic sensibilities. He has a fondness for realistic/naturalistic scenes of Arctic life; an instinctive grasp of line, form and composition; and a use of lighter coloured tones with little negative space. He had 5 prints in the Pangnirtung Print Collection when he was 14-years-old. Since then, he has been a regular contributor to the catalogue and the recipient of a number of important commissions.

Qappik designed the polar bear logo used by the Government of Nunavut and advised the Chief Herald of Canada on Nunavut’s coat-of-arms and flag. He also designed the logo for Nunavut Tunngavik Incorporated.