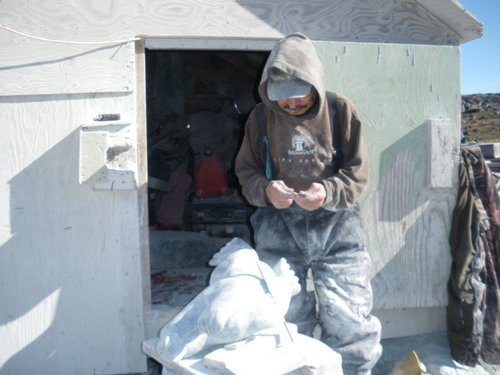 Name:
Axangayuk Shaa (1967 – )
Gender:
Male
Style:
Inuit
Region:
Cape Dorset, Nunavut Territory, Canada
*Aqjangajuk, who began carving in the lae 1950’s, does not do a great deal of detailing; instead he works for a total effect, concentrating on special interaction, expressive qualities and overall form. While some of his carvings of human and animal subjects are compact, robust, solid and static, others are more open, outwardly thrusting, dynamic forms. His only print, “Wounded Caribou” (1961) is a very effective portrayal of an animal stricken by a hunter’s arrow.”*
Aqjangajuk Shaa is the grandson of Kiakshuk, and the only child of Munamee Shaa, who was a carver and Paunichea, who was a well-known graphic artists. His wife, Kilabuk Shaa, is also a carver. Three of their sons, Pudalik, Qiatsuq and Qavavau Shaa are also carvers in Cape Dorset.