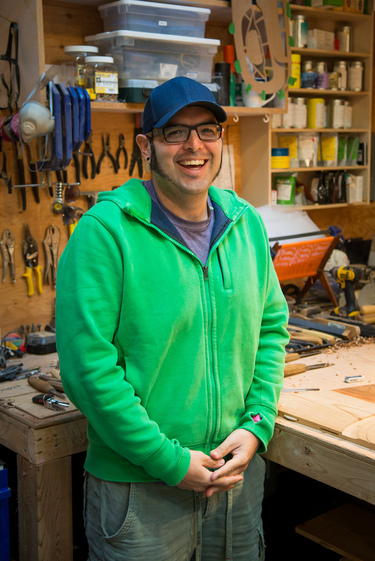 Ben Davidson is a Haida artist who draws upon his traditional knowledge of Haida design to create innovative and unique contemporary pieces, which are sought after by discerning collectors from around the world. Although he specializes in wood sculptures, Ben has experience with two-dimensional designs and has recently become interested in expanding his repertoire into jewelry and engraving.

Ben, whose Haida name is tlajang nang kingaas meaning “the one who is known far away,” is the son of internationally renowned Haida artist, Robert Davidson. As such, Ben was immersed in the Haida art form from a very early age. He began carving at the age of sixteen, eventually completing a four-year apprenticeship with his father.  Ben has also worked with other artists such as Reg Davidson and John Livingston. In addition, Ben has demonstrated a strong commitment to the future of Haida art by volunteering his time to work with younger artists.

His work has been displayed in various multi-artist shows at the Douglas Reynolds Gallery, and more recently he had a chief seat included in the show, Raven Travelling: Two Centuries of Haida Art. The chief seat was also featured in the accompanying book of the same name.

As a member of the traditional Haida dance group, the Rainbow Creek Dancers, his dedication to the revival of Haida culture moves beyond the realm of art. Ben is one of the original members of this group and this extensive experience enables him to continually explore the symbiotic relationship between the ceremonial and contemporary roles of Haida art.