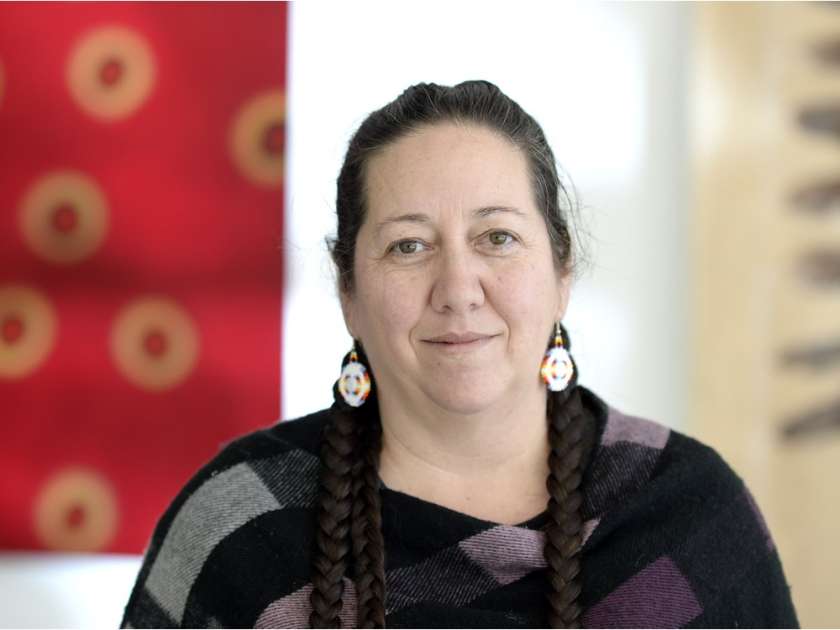 Name:
Christi Belcourt (1966 -)
Gender:
Female
Style:
Woodland
Region:
Lake of the Woods, Ontario
Christi Belcourt was born in Scarborough, Ontario in September, 1966. She is the first of three children born to Anthony (Tony) Belcourt and Judith Pierce Martin. Her Metis ancestry originates from the historic Metis community of Lac Ste. Anne, Alberta. Her ancestry includes Metis, Cree, Mohawk, English, French and Acadian. And there could be more, as Christi says, “these are the ones I know about anyway.”

Shortly after she was born, her family moved to Edmonton into her grandparents home. “I have vivid memories of my grandma putting her clothes through the ringer on the old washing machine to squish water out.” Her grandmother Matilda Belcourt (née L’Hirondelle) and grandfather (Emile Belcourt) both spoke fluent Cree/Michif but never to their children. Like many Aboriginal families back then, they wanted their kids to get ahead and to them, that meant having English as your first language. This is the story of the decline of Aboriginal languages in Canada. Her father Tony Belcourt, has been a Métis leader for over 30 years and was elected as the first President at the founding meeting of the Native Council of Canada in 1970. Following the election he believed that it was necessary to move to Ottawa in order to effectively lobby the government regarding Metis rights. The family made a move to Ottawa permanently, where Christi, her sister Suzanne and brother Shane were raised. Christi didn’t graduate from high school, instead quitting after grade 11 in order to enter the workforce. She worked in several menial jobs, bouncing from job to job. She entered what she calls “a dark period in my life” and was involved with drinking and drugs for a long time. “My life seemed not to have a purpose or direction.” She continued to paint throughout her 20’s as a hobby, experimenting with different materials. Around 1990 a friend, Audrey Mayes, introduced her to Wilfred Peltier, and Odawa elder. 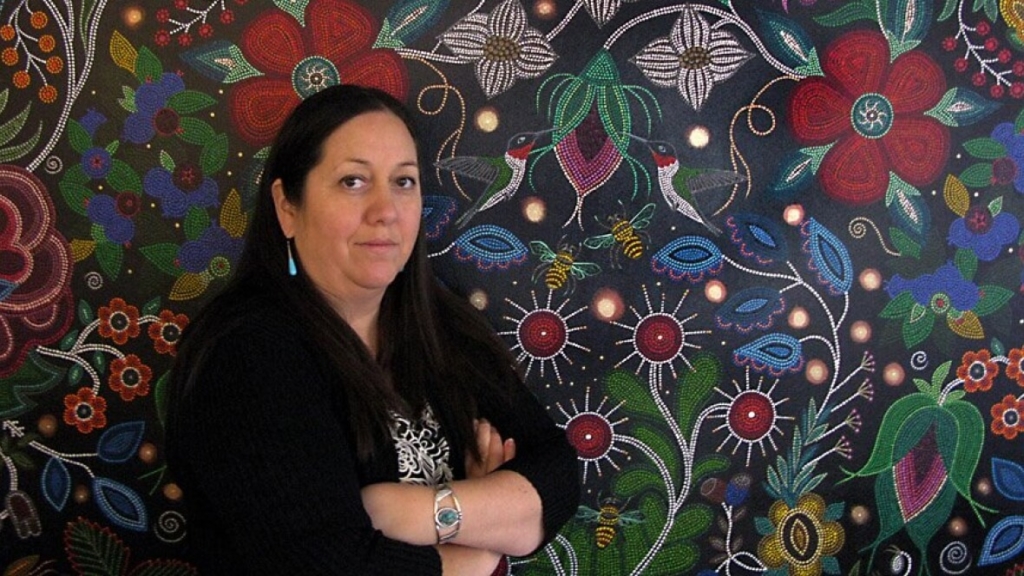 As Christi tells it, “Wilfred’s warmth and love for everyone and everything was apparent from the first time you met him. I spent many an hour with him, listening to his stories and philosophy. I think he felt it was a personal mission of his to ‘bring me back’ to my roots, and I’m grateful he did. He taught me how to laugh and importantly how to laugh at myself. He emphasized acceptance of self and others. Eventually he introduced me to his sister Yvonne McRae (nee Peltier). Yvonne took me under her wing, as a mentor and a friend for many years. Yvonne and Wilfred took many young Aboriginal people under their wings and tried their best to teach them traditional teachings about thought and the way of seeing the world. Yvonne was the first one to teach me how to put out tobacco as an offering. I had my first sweat at her house. I could write a book about all the times I and other youth spent there, and I could fill the pages with everything I’ve learned from them. They were remarkable people. “

1993 was a breakthrough year for Christi artistically and personally. She was 27 and had spent a few years getting back to her roots. She was inspired by the beadwork on a pair of Mukluks Yvonne had given her and made the decision to try to ‘paint’ it.

“With this first painting I learned two very important things. Number one, I didn’t know enough about plants to be painting them, and number two, I didn’t know enough about beadwork to paint it either”, Christi says. These two realizations spurred her interest in plants and beadwork. “Every plant I came across, I looked at it in detail, I spoke to it, I asked it ‘how did you grow like that?’ My love for plants deepened further and further, and I began to understand what people meant when they said “we are all connected””.

Her in depth study of beadwork came a bit later, when she was given a copy of the Gabriel Dumont Institute’s publication Expressing Our Heritage: Metis Artistic Designs. Again, as she describes it, she found herself “devouring” as much information on beadwork designs as she could find.

In 2003, she moved from Ottawa to the Manitoulin Island region, and then recently she moved further west to Lake of the Woods area. A move Christi considers to be the most important of her adult life. “Moving away from the city allowed me the freedom to study plants, and to get to know the land on my own schedule. I felt like a dog chasing its tail when I lived in the city. I was negative and distracted. Close to the land I’m focussed, I’m relaxed – I’ve totally changed, and my art has benefited in every way imaginable because of it.”