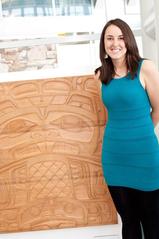 Name:
Cori Savard (1985 –  )
Gender:
Female
Style:
Haida
Region:
Pacific Northwest Coast, Canada
Haida artist Cori Savard (Yahl ‘Aadaas) was born to the Yahgu’laanaas Raven clan on Haida Gwaii. Her family moved to the Ottawa/ Gatineau area after she was born, but her connection to her Haida roots was maintained by weekly visits to the permanent collection of Haida works on display at the Canadian Museum of Civilizations in Gatineau, Quebec.

Cori returned to Haida Gwaii in 2002 and quickly immersed herself in the art of her ancestors exploring 2-dimensional design, cedar weaving, painting, and taking part in multiple design workshops taught by Robert Davidson in Old Massett and Skidegate. In 2007, Cori received a YVR Art Foundation Youth Scholarship which enabled her to study under Robert’s brother, Reg Davidson. Over the course of 8 years, Cori learned carving techniques applicable to masks, sculptures, and monumental works, taking part in multiple totem pole projects. She also worked closely with mentor Ben Davidson between 2012-2020, expanding her knowledge and skills in painting and carving as well as learning jewelry techniques in chasing and repoussé in his studio and gallery in Skidegate.

Another highlight of her young career was dancing in the opening ceremonies for the 2010 Winter Olympics in Vancouver. In 2012, Cori was again recognized by the YVR Art Foundation, winning the Frank O’Neill Visionary Award for her cultural vision and artistic determination.

Cori now works from her studio in Skidegate, Haida Gwaii, and maintains a close working relationship with her mentor Reg Davidson.