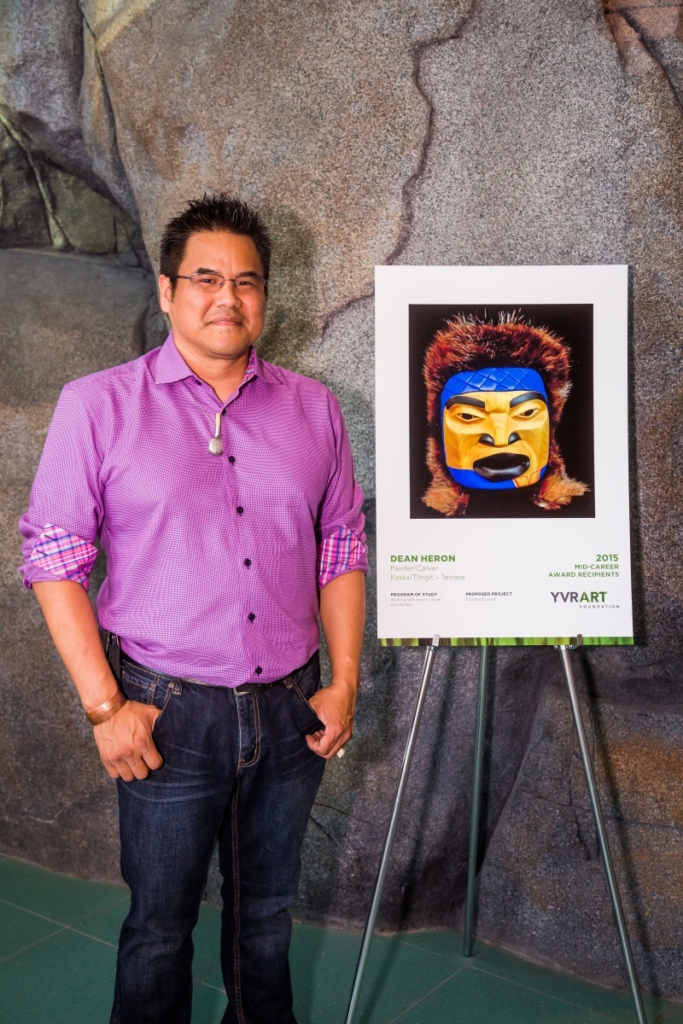 Name:
Dean Heron (1970 – )
Gender:
Male
Style:
Tlingit
Region:
Pacific Northwest Coast, Canada
Dean Heron, born in 1970, is Kaska/Tlingit and member of the Wolf Clan from Teslin, Yukon. His father was a teacher and superintendent of public schools which allowed Dean to see many parts of the country while growing up. It was living in northern British Columbia that had an impact on his sense of environment, community, and self-identity. His parents encouraged him to search out his heritage from a young age.

In the early 1990’s Dean started to pursue a lifelong commitment to learning First Nation’s art with the encouragement and support of his wife. He began designing and painting at first, but wanted to learn to carve. In 2006, this took him back to the north – to Terrace, B.C. where he began formal training in drawing, design, tool-making and carving under prominent Northwest Coast artists Stan Bevan, Ken McNeil, and Dempsey Bob at the Freda Deising School of Northwest Coast Art. In the spring of 2007 Dean was recognized by the Northwest Community College with the Dr. Freda Diesing Award.

Dean’s current body of work includes serigraphs, paintings, regalia design and wood carvings. His salmon depiction What the Future Beholds was selected by the University of British Columbia Fisheries Centre as their official logo. In the summer of 2007, Dean and fellow student Henry Kelly were asked by teachers Bevan and McNeil to paint five longhouse fronts for the community of Kitselas, BC.

Encouraged to teach, Dean began instructing at Northwest Community College in spring of 2007, through the College’s Continuing Education Department. Here he taught local youth the fundamentals of Northwest Coast design.

In December of 2007 Dean traveled with his teacher and mentor, Stan Bevan, to Australia and New Zealand to open the People of the Cedar exhibit in Melbourne, Australia and to visit carving schools in New Zealand with the intention of learning from their curricula and to speak to and learn from other indigenous artists.