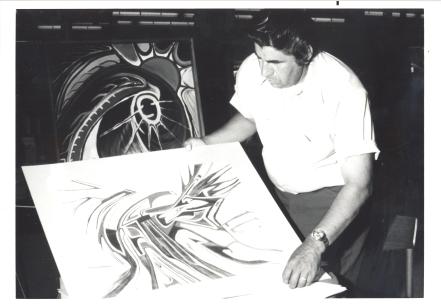 Name:
Eddy Cobiness (1933 – 1996)
Gender:
Male
Style:
Woodland
Region:
Winnipeg, Canada
Eddy Cobiness was born in Warroad, Minnesota but was raised on the Buffalo Point Reserve in Eastern Manitoba. He signed all his works with his treaty number ’47’. Cobiness was a member of the so-called Native Group of Seven, also known as The Woodlands Group of Seven which came together in 1972. The group included Norval Morrisseau, Daphne Odjig, Carl Ray (murdered in Sioux Lookout in 1978), Jackson Beardy (died of a heart attack in 1984 at the age of 40), Alex Janvier and Joe Sanchez.

After a career in the U.S. Army in the late ’50’s, where Eddy was a Golden Glove boxer, and a stint as a pulp-cutter and fisherman, he began to concentrate on painting. A treaty Ojibwa Indian, Cobiness had a large studio in Buffalo Point on the shore of Lake of the Woods, but was forced to move to Winnipeg in 1974 because of ill health.

Eddy was given the nickname “Doc” by the artistic community for his support and care of his fellow native artists. His art is in the private collection of Queen Elizabeth and Canadian Prime Minister Jean Chretien and actor Charlton Heston. Eddy died in Winnipeg, Manitoba on January 1, 1996 from complications due to diabetes. He was 62.

Cobiness was buried near his studio in Buffalo Point. He is survived by his wife Helen of 34 years and eight children.

Eddy Cobiness frequently painted stylized images of animals, and was known for being able to capture the essence of the various creatures or warriors with just a few deft strokes, a style that came to be known as “the flowing art of Eddy Cobiness.”

“I have met and worked with many talented young artists, who have so much to contribute to the world of visual art. I hope, by setting a good example myself, that someday you will get to know them too.”