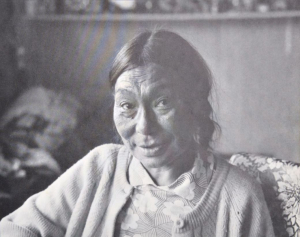 Eegyvadluk was married to the carver and graphic artist Sakiassie Ragee. Her daughter Sorosoluto Onalik is a graphic artist and carver, now living in Iqaluit.

“Eegyvudluk was the oldest child born to Pamiaktok and Sorisolutu at the small campsite of Ikarasak, on the southern tip of Baffin Island. Upon the birth of a younger sister, Eegyvudluk moved to the home of her grandparents, who lived in a nearby camp. She recalled little of her childhood, until her marriage to Kootoo. A son and daughter were born, the former having died as an infant. Kootoo himself died soon after of an undisclosed illness. When Eegyvudluk’s daughter reached the age of four, she married again, to Sakkiassie. Together they adopted four children and lived first at Nuvudjuak, then later moving to Tikerak, some eight miles from Cape Dorset. From 1955-58 Eegyvudluk, Sakkiassie, and their oldest adopted son Peter, were in the Brandon, Manitoba sanitorium recovering from tuberculosis. They returned to Tikerak once again.”

“Eegyvudluk began to draw in 1959 … when she was living at Tikerak…. During those occasions when Egevadluq travelled to the settlement of Cape Dorset to trade for supplies, she would obtain graphite pencil and paper from the West Baffin Eskimo Co-operative. Her early works filled entire sheets of paper – mythical creatures, bird-animal-human transformations, and images from reality – all intermingled one with the other at random. By the mid-1960s, Eegyvudluk was utilizing wax crayons, or coloured felt pens on paper. A refinement developed in her work, resulting in a more simplified approach, yet never completely the bird-animal-human theme. In 1967, improved housing in Cape Dorset resulted in the Inuit abandoning most of the campsites. Eegyvudluk moved into the settlement, however this change in her life did not affect her artistic output. In the early 1970s, Eegyvudluk explored the use of arcrylic washes, on which she drew her well-known figures and birds.” — WBEC profile sheet

“I started drawing because I was tususkuk (when I saw other people doing it, I wanted to do the same things)…When I start to make a drawing, I have a picture in my mind, but when I try to put that picture on paper, my hands won’t do what my mind wants. When I have the picture in my head, I can’t get it out by my hands. Sometimes I find it hard to draw when my children are in the house; I find it hard to think with so much noise around me. I make the kids go outside.”