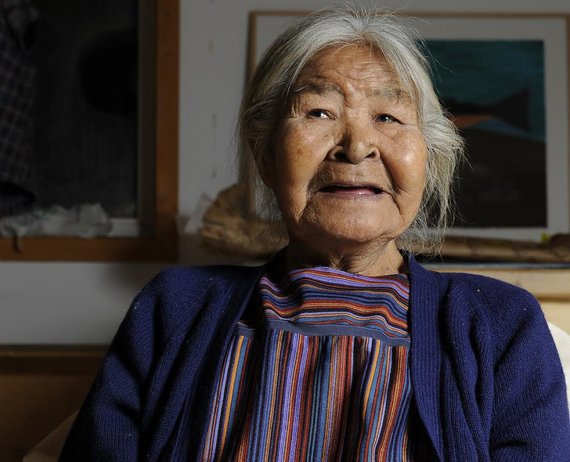 Name:
Elisapee Ishulutaq, OC (1925 – )
Gender:
Female
Style:
Inuit
Region:
Pangnirtung, Nunavut, Canada
Elisapee Ishulutaq was born in 1925 at Kagiqtuqjuaq, one of several small seasonal camps situated near Pangnirtung (also known as Panniqtuq) on Baffin Island. Although Europeans had been present in the region since the mid-19th century, the world she grew up in was still intensely traditional: men still hunted caribou from sealskin kayaks, and women continued to fashion winter clothing for their families out of hide. In the late 1960s Ishulutuq took up permanent residence in Pangnirtung, becoming involved in the growing community’s new art-making program. She became known for her drawings recalling the old way of life, contributing numerous images to the settlement’s annual print releases. Recognizing the originality and force of her drawings, Pangnirtung’s weavers began using Ishulutaq’s designs as the basis for their largescale tapestries, a practice that has been maintained into the present. Long considered to be one of her community’s most prominent artists, Ishulutaq continues to be artistically active, exploring a range of new media and artistic possibilities. She was appointed to the Order of Canada in 2014.

Like many artists of her generation, Ishulutaq prefers to represent the traditional Inuit way of life that she knew before the transition of permanent settlements. “I liked the freedom of the earlier life, there was less regimentation,” she states. Ishulutaq’s subjects include hunters pulling seals across the sea ice and kayakers paddling close to shore. Themes of Inuit mythology have also appeared in her work. She is especially interested in representing domestic Inuit life, as seen in a series of images depicting families inside igloos and tents. In these largely autobiographical works, Ishulutaq freely combines perspectives, often employing both side views and aerial perspectives in the same image, resulting in compositions marked by a powerful formal abstraction. In 2009, Ishulutaq embarked on a series of images using the new medium of oil sticks. Taking advantage of the medium’s colour richness and unique textural possibilities, her expression has found a new directness and intensity. At times truly monumental scale, many of Ishulutaq’s oil stick drawings feature figures set against vast landscapes made ethereal by means of a fluid blending of colours.