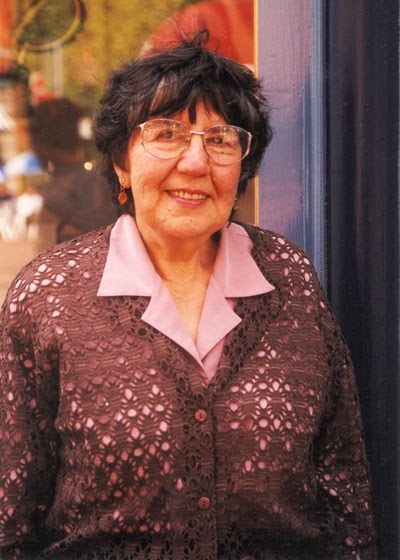 Name:
Freda Diesing (1925 – 2002))
Gender:
Female
Style:
Haida
Region:
Pacific Northwest Coast, Canada
Freda Diesing, aka Kant Wuss, Skill-kew-wat & Wee-hwe-doasl, was born in the Sadsugohilanes Clan of the Haida in British Columbia to Flossie and Frank Johnson. Her Haida name, Skill-kew-wat, translates roughly as Magical Little Woman. Diesing studied painting at the Vancouver School of Art, after which she developed an interest in her Haida heritage. At the age of 42, she undertook woodcarving apprenticeships under Tony Hunt, Henry Hunt, Bill Holm, Robert Davidson and Duane Pasco.

Diesing’s ceremonial masks and totem poles, which often depict female forms and figures, led to recognition of Diesing’s unique representation of Northwest Coast folklore. The artist’s textile works, including blankets and robes, also incorporate traditional First Nations forms and designs. In the 1970’s, Diesing began to explore silkscreen printing and was later commissioned for a wall mural by the Prince Rupert General Hospital. Diesing was an influential instructor at the ‘Ksan Indian Art School in British Columbia. For a number of years, she also taught an annual seminar in carving in Ketchikan, Alaska. As a teacher and as an artist, Diesing has inspired many, including artists Dempsey Bob and Donnie Yeomans.

She has been instrumental in the revival of Northwest Coast art and has received numerous awards, including the National Aboriginal Achievement Award from the National Aboriginal Achievement Foundation, and an honorary doctorate from the University of British Columbia in 2002. The City of Prince Rupert, the Department of Indian and Northern Affairs in Ottawa, the National Museum of Civilization in Hull, Quebec and the Royal Ontario Museum in Toronto have all collected Diesing’s works. A selection of her totem poles currently stands in Prince Rupert and Terrace, British Columbia.