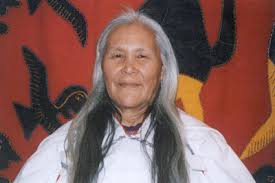 Name:
Irene (Tiktaalaaq) Avaalaaqiaq (1941 -)
Gender:
Female
Style:
Inuit
Region:
Baker Lake, Nunavut, Canada
Born in 1941 in the Kazan River area, Avaalaaqia moved to Baker Lake in 1958, where she still lives. Avaalaaqiaq is one of this country’s most prominent Inuit artists and a leading member of the prolific artistic community of Baker Lake in the new Canadian arctic territory of Nunavut, has enjoyed a distinguished thirty-year career. A distinctive creator of drawings, prints, and sculpture, she is best known for her remarkable wall hangings, which reveal a rich tradition of spirit and shamanistic imagery. Avaalaaqiaq brings a highly individualistic vision to her tapestries. Her world view, derived from an oral tradition, is expressed by manipulating bold shapes in bright contrasting colours against a solid background. In this first critical retrospective of Avaalaaqiaq’s work, Judith Nasby discusses her life and art as well as her commitment to preserving her heritage and making it accessible to an international audience.

Irene Avaalaaqiaq has received commissions for public buildings from Churchill, Manitoba, to Minneapolis, to Ottawa. She has had solo exhibitions at the Isaacs/Innuit Gallery in Toronto and her work was included in a touring exhibition organized by the Baltimore Museum of Art. In 1999 she had a solo exhibition at the Macdonald Stewart Art Centre at the University of Guelph and was awarded an honorary Doctor of Laws from that institute.