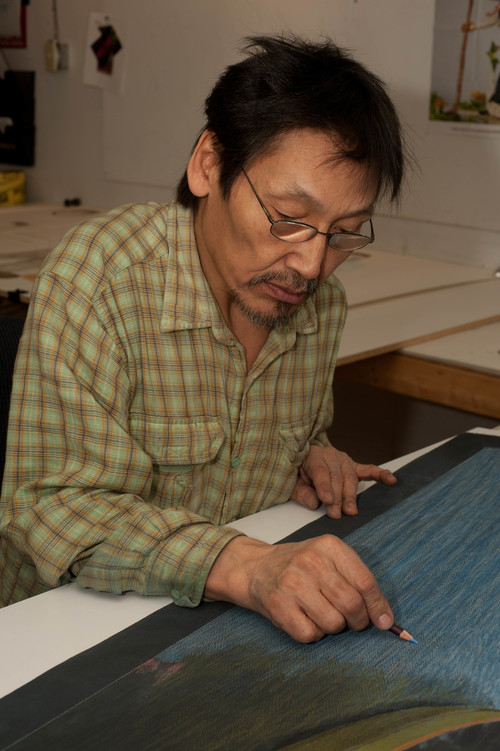 A resident of Cape Dorset, Nunavut, Itee Pootoogook belongs to a new generation of Inuit artists who are transforming and reshaping the creative traditions that were successfully pioneered by their parents and grandparents in the second half of the 20th century. Born in 1951 in Kimmirut (formerly Lake Harbour) on southern Baffin Island, he moved to Cape Dorset when he was still a child. The son of artists Ishuhungitok and Paulassie Pootoogook, Itee has been drawing and carving for several years but it is only recently that he has been actively involved with Kinngait Studios in Cape Dorset. The first print edition of Itee’s work, Looking South, was released in the Spring of 2008 as part of the “Nine Works by Seven Artists” contemporary folio. This was followed by the Fall 2008 annual Cape Dorset print release, in which Itee’s work was featured with two of his recent prints.

A meticulous draughtsman, Pootoogook looks primarily to contemporary northern life for his subject matter. He is especially interested in modern local architectural forms, producing works in graphite and coloured pencil that depict various contemporary buildings in Cape Dorset. Pootoogook’s portraits of acquaintances and family members similarly bear witness to the North of today. Whether they are captured at work or rest, Pootoogook’s subjects are shown engaged in a range of modern activities including stone carving and watching television indoors. Featuring a minimum of incident, these understated images celebrate the mundane moments that make up the everyday. Pootoogook is also an inventive landscapist. Many of his finest Arctic landscapes make use of extended formats, giving emphasis to the open horizon that separates land from sky. Although some compositions are produced from a combination of memory and imagination, Pootoogook bases many of his drawings on photographs, an aspect of his artistic process that further highlights his contemporaneity.