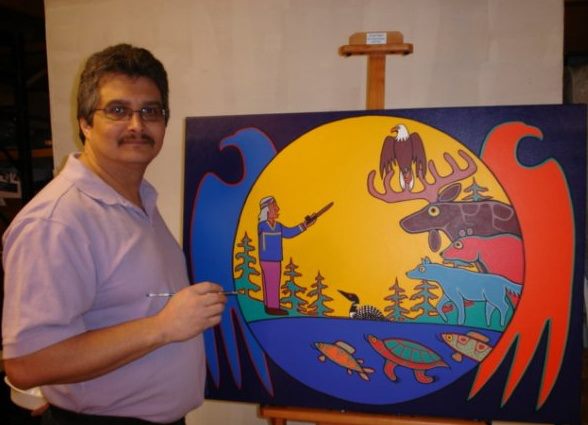 Name:
Jim Oskineegish
Gender:
Male
Style:
Ojibwe Woodland
Region:
Northern Ontario, Canada
Jim comes from Nakina, a small town in Northern Ontario. His mother comes from the Eabametoong First Nation in Ontario, Canada and his Father came from Poland where he lived in the city of Lwow. Both of Jim’s parents suffered traumatic experiences as children. Jim’s mother was forced to attend and suffer the treatment of Residential Schools and his father survived the concentration camps during WWII.​​ Jim’s early childhood was full of traumatic experiences that no child should ever have to go through. Jim was taken from his home during the sixties scoop at the age of five and went through the foster care system where he endured emotional and physical trauma. Through all the tribulations Jim went through as a child there was a silver lining in the field of Art.

Jim gravitated towards art at an early age and was proud of what he could draw and paint. Jim finished high school and attended University in the Visual Arts program at Lakehead University in Thunder Bay, Ontario. He used the artistic skills he had developed at Lakehead to help the children and families he worked with in the mental health field.

Jim went into hiatus to support and provide for his family. In the spring of 2005 Jim picked up the brush once again with the encouragement of his nephew Mark Anthony Jacobson who is a third generation woodland artist based out of Vancouver BC. Jim painted three works of art in the Ojibwe Woodland Style and these three paintings were blessed by Norval Morrisseau while Mark Anthony Jacobson and Norval were doing a show together in Nanaimo BC. 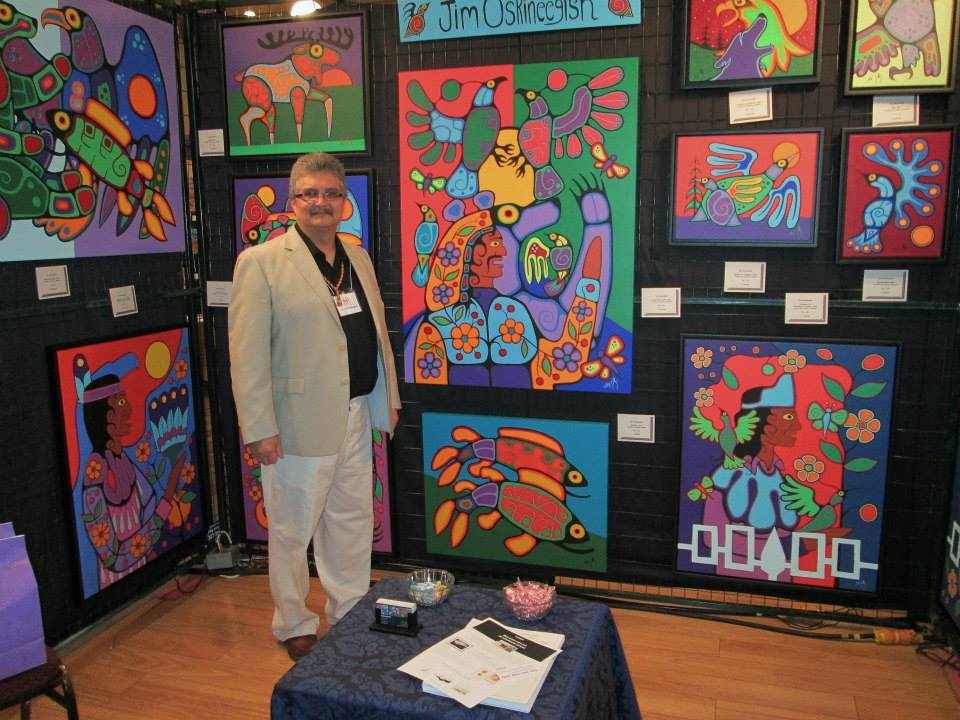 Norval Morrisseau gave Jim his blessing that he could paint in this style and tradition. Jim has been painting on a fulltime basis in the Ojibwe Woodland style since 2005. Jim is a born medicine man and artist along with being a traditional drum keeper, eagle staff carrier as well as pipe carrier as these sacred items were given to him by the creator. Jim has been learning from traditional elders from the treaty #3 area and was adopted into the Atik (caribou) clan of Siene River and Eagle Lake. As Jim continues on his journey through life his focus has been painting and sharing his life experiences through his paintings. He paints his dreams and thoughts, hoping this can help another human being in some way. Jim uses solid bold colors and tries to achieve a visual balance of color and feeling in his work.

Jim wants to promote Ojibwe culture to the world by painting stories and legends, as well as traditional teachings and​​ values. Jim draws inspirations from 1st generation woodland artists like Norval Morrisseau, Roy Thomas and Benjamin Chee Chee to name a few. Jim is painting his life and these paintings are spiritual based as he believes that inner soul consciousness is to be shared and feels that this style of art can help beautify the world we live in.

“I believe that Woodland art can promote healing and understanding amongst all of mankind. Color, I believe is a power that the creator gave us to communicate traditional values and teachings. Ojibwe culture is alive and well as long as we express it in a good way”
[/one_half_last]