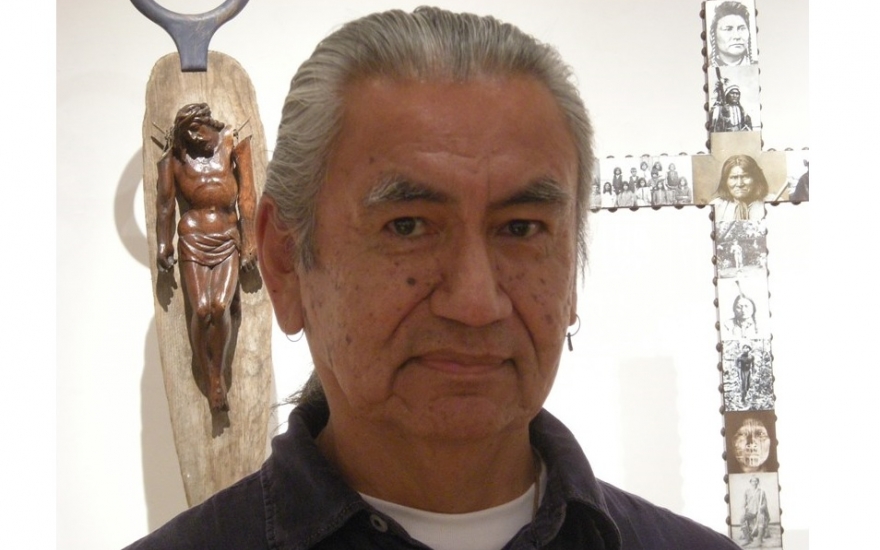 Name:
Joe David (1946 -)
Gender:
Male
Style:
Nuu-Chah-Nulth
Region:
Pacific Northwest Coast, Canada
Joe David was born in 1946 at Opitsaht, a Clayoquot village on Meares Island, on the western shore of Vancouver Island. The family resettled to Seattle, Washington, in 1958—and they moved frequently during his teen years. His father, Hyacinth David, was a respected chief and elder of the Clayoquot nation, and even though he had removed his family from Nuu-chah-nulth territory, he remained connected to the village and practiced the traditional values and ceremonies.

Joe vividly recalls watching the ceremonies he attended as a child. His grandmother was a medicine-woman who predicted that Joe would become an artist while he was still an infant. Both his father and mother had been initiated in the (Klukwana)Wolf ritual. In 1969, he received from his father’s family the name “Ka-Ka-Win- Chealth” (Supernatural White Wolf transforming into Killerwhale), in recognition of his commitment to carving and cultural participation. Joe expanded the cultural teachings started by his father by visiting museums and libraries and studying Nuu-chah-nulth art and culture. He studied art in Seattle and San Marcos, Texas, but his interest in his own heritage and tradition led him to Bill Holm, the Northwest Coast scholar at the University of Washington, and also to Duane Pasco, an early artist of the contemporary generation of Northwest Coast art, to begin an intensive study of traditional Northwest Coast objects. His later investigations concentrated on only Nuu-chah-nulth style. He was drawn to the spiritual essence within the art and culture—and this later directed his path in art-making.

Joe began a spiritual quest starting with his own cultural beliefs, which later led him to the practices of other nations across North America and internationally. He has had a long-term relationship with the Maori of New Zealand and has attended and participated in many events there. In 1988, he participated in the Sundance ceremonies at Camp Anna Mae, Big Mountain, Arizona, and has continued to attend each year —and, with rare exception, has often been one of the participants.

Joe David today is among the most respected master-artists of the Northwest Coast. Museums, private collectors, and corporations collect his graphics, wood sculpture, silver, and bronze internationally. He is also dedicated to participating and contributing to contemporary ceremonies as well as lecturing on Northwest Coast art. In 2000, he was the first artist chosen for the Aboriginal Artist in Residence program at the Pilchuck Glass School.