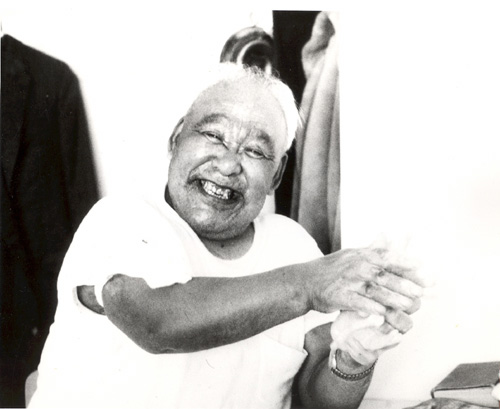 Name:
Joe Talirunili (1893 – 1976)
Gender:
Male
Style:
Inuit
Region:
Puvirnituq, Nunavut, Canada
Joe Talirunili was one of the founders of the Puvirnituq print shop. Common themes in Joe’s works included hunting trips and migration scenes. Joe is perhaps best known for his work called “Migration” which portrays one of his childhood experiences, when families set sail in an umiak (large sealskin boat) to travel to better hunting grounds. This scene was repeatedly depicted in Joe’s carvings, drawings and prints.

“He left a legacy of sculpture, prints and drawings, which were unique in the way he crafted even the most mundane subject. His owls were horned ‘Joe’ owls, his human figures, animals and hunting scenes were instantly distinguishable, as were the haunting ‘migration’ boat scenes, whether rendered as drawings, prints or sculptures. Perhaps redundant as identification, but part of his enormous charm, was the inevitable ‘JOE’ (sometimes backwards) carved into his stones, almost as part of the image. His contributions to editioned print collections started with the initial release in 1962 and continued without a break through the next 10 collections for a total of some 70 stonecut prints. He cut his own stones and probably tried his hand at printing, too, on occasion.”* Joe’s cousin, Davidialuk Alasua Amittu was also a renowned Puvirnituq artist. The two men were known in the community as great storytellers and they both produced many sculptures in the 1950s and graphics in the 1960s. Both men enjoyed long and fruitful careers and passed away within months of each other in 1976. Joe’s daughter, Sarah Joe Qinuajua is also an artist in Puvirnituq.