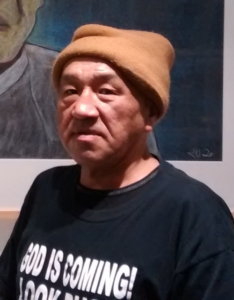 Name:
Jutai Toonoo (1959 – 2015)
Gender:
Male
Style:
Inuit
Region:
Cape Dorset, Nunavut Territory, Canada
With a vision that is at once highly personal and often politically subversive, Cape Dorset’s Jutai Toonoo is a dynamic voice in contemporary Inuit art and in Canadian art more generally. Born in 1959, Toonoo belongs to the first generation of Inuit to grow up in permanent year-round settlements as opposed to small seasonal camps. He learned to carve by watching his father, Toonoo Toonoo, a respected leader and first-generation carver. Nevertheless, Jutai’s work bears little resemblance to other Cape Dorset sculpture, eschewing such standard subjects as wildlife and mythological figures. He is perhaps best known for his boldly formed sculptures of human heads, which he renders as though lost in a kind of agitated sleep.  Many of Toonoo’s sculptures bear witty or satirical inscriptions of text carved in English directly onto the stone’s surface. In recent years, he has become an active participant in Cape Dorset Co-op’s drawing and printmaking program, producing a series of drawings of human heads and portraits in a semi-abstract style that combines a haunted expressionism with cartoon-like renderings.