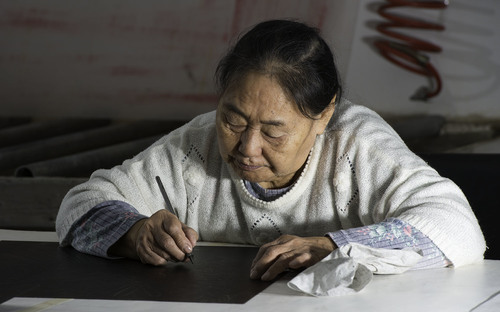 Name:
Kakulu Saggiaktok (1940 – )
Gender:
Female
Style:
Inuit
Region:
Cape Dorset, Nunavut Territory, Canada
I like to draw birds, Sedna, seals and beluga whales. They are the most fun and I really enjoy seeing them in the wild.
It’s always a good feeling when you see your art work published and know that people appreciate it. -Kakulu Saggiaktok Kakulu was born in 1940 on board the Hudson’s Bay Company supply ship, Nascopie. Her family had travelled from south Baffin Island to hunt and trap in the northern regions of the island. Kakulu was a child when she moved back to the Cape Dorset area.

Kakulu began to draw in the early 1960’s when the West Baffin Co-operative established its printmaking studios. Many of her images explore the theme of transformation, with animals blending into other animals, humans becoming animals and vice versa. This is a predominant subject in traditional Inuit folklore and Kakulu Saggiaktok mythology, where the natural and supernatural worlds were mediated by the shaman. Kakulu’s work is always imaginative and often playful and charming and much of her inspiration comes from her childhood memories of living on the land.
Kakulu’s mother was Ikayukta (deceased), also one of the early contributors to the annual print collections from Cape Dorset. Kakulu was married to Saggiaktok (deceased), who was a printmaker in the stonecut studio for many years.