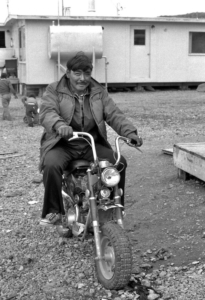 Kananginak had been involved with drawing and printmaking since the late 1950’s when the West Baffin Eskimo Co-op first initiated the graphic arts program at Cape Dorset. He came to Cape Dorset in 1958, when James Houston brought printmaking to the North.  He became one of the four original printers. Kananginak works in all media, including silk-screen printing of textiles.  However, he excels as an engraver and lithographer, particularly of wildlife art, which he has mastered completely while retaining a personal style with definite abstract qualities.  His sister, Napatchie and brother, Paulassie, are also good artists.”Kananginak’s first print, a collaborative image with his father, Pootoogook, was included in the first catalogued collection of Cape Dorset prints in 1959.  His work has been included in all but three annual collections since that time.

Kananginak and his siblings grew up in different camp areas on south Baffin Island.  Their main camp was Ikerrasak where their father, Pootoogook, was the respected camp leader.  Kananginak married Shooyoo from Cape Dorset in the mid-1950’s. They lived at Ikerrasak until 1958 when they moved to Cape Dorset because of Pootoogook’s failing health.

From the beginning Kananginak had represented Arctic wildlife in his work.  He was especially capable at drawing the many species of birds, which frequent the Arctic.  In the 2000’s he focused on the material culture of the Inuit, producing realistic, narrative drawings of camp and hunting scenes.  His work has been produced in several print media – copper engravings, stonecuts, stencils, lithographs and etchings.  Kananginak was an accomplished printmaker himself; in the early years he often proofed and editioned his work.

Kananginak was a prominent and involved community leader.  He was instrumental in the formation of the West Baffin Eskimo Co-operative and served for many years as President of its Board of Directors. He was also a member of the Royal Canadian Academy.

In 1978, the World Wildlife Commission released a limited edition portfolio of works in which four of Kananginak’s images were included. His work has been featured in numerous exhibitions in both public institutions and commercial galleries.  He was also a notable sculptor.

In 1997, Kananginak was commissioned by the Governor General of Canada, Romeo Leblanc, to construct an Inukshut in Cape Dorset, which was then deconstructed and shipped to Ottawa.  Kananginak and his son, Johnny, were then invited to Ottawa to re-assemble the Inukshuk on the grounds of Rideau Hall as part of a tribute to native people in Canada.

Kananginak lived in Cape Dorset with his wife, Shooyoo and their family until his death in 2010.