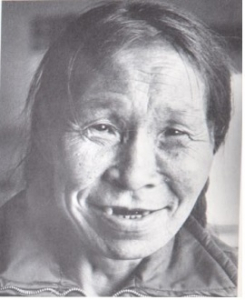 Name:
Keeleemeeoomee Samualie (1919-1983)
Gender:
Female
Style:
Inuit
Region:
Cape Dorset, Nunavut Territory, Canada
Well known for the strong sense of design in the drawings of her constant subject, the birds of the Arctic, Keeleemeeoomee is one of a family of artists: her sister Tye draws, her brother Iyola Kingwatsiak is a printmaker and carver, and a deceased sister, Anna, was also an artist.

Keeleemeeoomee moved to Cape Dorset around 1966 with her second husband, Samuellie, and their family, and has been engaged in carving and drawing ever since.

Keeleemeeoomee Samualie was born on the land on the west coast of Baffin Island, NU. Samualie’s work was featured in several Cape Dorset Annual Print Collections from 1969-1983, and has influenced multiple generations of artists, including her granddaughter, Nicotye Samayualie. Samualie pulled from childhood memories to guide her art practice, filtering her experiences into her work in a playful manner. In Fox and Seal (1978), Samualie’s animals are not drawn with the intention of being true to life but instead are flattened and depth is added into the work through the pattern and texture drawn on each animal’s skin. The resulting works emphasized Samualie’s point of view and her own illustrative style, rather than being a naturalistic rendering.