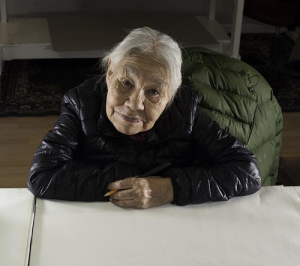 “When I first started to make a few lines on paper, my love, Johnniebo, smiled at me and said, ‘Inumn,’ which means ‘I love you.’ I just knew inside his heart that he almost cried knowing that I was trying my best to say something on a piece of paper that would bring food to the family. I guess I was thinking of the animals and beautiful flowers that covered our beautiful, untouched land” (Kenojuak Ashevak in Speak 2008:12).

“I just take these things out of my thoughts and out of my imagination and I don’t really give any weight to the idea of its being an image of something. In other words, I am not trying to show what anything looks like in the material world. I am just concentrating on placing it down on paper in a way that is pleasing to my own eye whether it has anything to do with subjective reality or not. That is how I have always tried to make my images and that is still how I do it and I haven’t really thought about it any other way than that. That is just my style and that is the way I started and that is the way I am today.”

Kenojuak, from an interview with Jean Blodgett, 1980

“Drawing out of your imagination is a lot better to me anyway. What you see in your head, is what you try to put in drawing…I try to make my drawings look attractive enough.”

Kenojuak, from an interview with Odette Leroux 1991

Kenojuak Ashevak is one of Canada’s most acclaimed graphic artists. Her ling list of achievements and honours is surpassed only by her stamina and good humour,
Born on south Baffin Island at a camp area known as Ikirisaq, Kenojuak grew up traveling from camp to camp on south Baffin and in Arctic Quebec. (Nunavik). As a young woman, she was married to Johniebo and lived with him in various camps including Keakto, a scenic area seven miles from Cape Dorset. While still living at Keakto in the late 1950’s, both Kenojuak and Jonniebo first experimented with carving and drawing. They moved to Cape Dorset in 1966 in order for their children to attend school, and continued to work closely together until Johnniebo’s death.

Kenojuak’s drawings were immediately captivating and she has been represented in almost every annual collections since 1959. her work has also been included in numerous special projects and commissions. In 1961 she was the subject of a film produced by the National Film Board about her traditional life and art. The film is still shown today, and was instrumental in introducing her to the world beyond Cape Dorset. In 1970 her print, Enchanted Owl (1960) was reproduced on a stamp commemorating the centennial of the Northwest Territories, and again in 1993 Canada Post selected her drawing entitled The Owl to be reproduced on their 0.86 cent stamp.

Special commissions include the World Wildlife Print Portfolio released in 1978. In the same year, the Commonwealth Print Portfolio featured one of her works. her art and life were the focus of the limited edition book entitled Graphic Arts of the Inuit: Kenojuak, published in 1981. In 1988, Via Rail Canada commissioned a large mural from Kenojuak for their Club Car series, which featured some of Canada’s most highly respected artists. Kenojuak’s print Nunavut Qajanatuk (Our Beautiful Land) was commissioned by Indian and Norther Affairs Canada to commemorate the signing of the Inuit Land Claim Agreement in Principle, in April 1990. To commemorate the signing of the Final Agreement early in 1994, Kenojuak conceived and hand-coloured a large and exclusive lithograph entitled Nunavut. 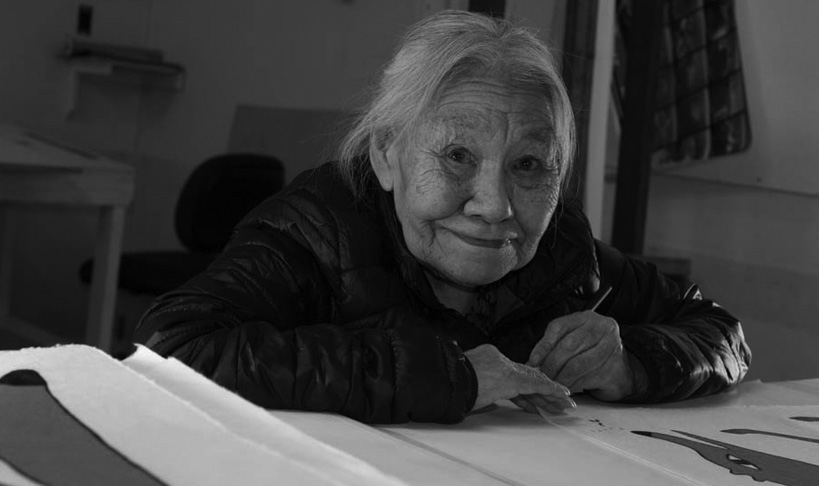 April 1st, 1999 marked the official inception of the new Territory of Nunavut in Canada;a Arctic. To commemorate this historic event, Dorset Fine Arts released a special edition of ninety-nine prints by Kenojuak – a large diptych entitled Siilavut, Nunavut (Our Environment, Our Land).
Kenojuak has received many special honours over the years, She is now a Companion in the Order of Canada, which she originally received in 1967. In 1992, she was awarded Honorary Degrees from both Queen’s University and the University of Toronto. In 1996 she received the prestigious Lifetime Achievement Award at the National Aboriginal Achievement Awards Ceremony in Vancouver. In the spring of 2001, Kenojuak was inducted into Canada’s Walk of Fame, and traveled with her daughter, Silaqi, to attend the ceremonies in Toronto. She is the first Inuit artist to be so honoured, and joins many other famous and accomplished Canadians.

Kenojuak has traveled all over the world as an ambassador for Inuit art. In 1969, she and Johnniebo traveled to Ottawa to collaborate on a mural which hung in the Canadian Pavilion at Expo ’70 in Osaka, japan. In 1980, she traveled to Rotterdam, Holland to be present at The Inuit Print exhibition which was opened by the Queen of the Netherlands. In 1991. she traveled to Seoul, South Korea to attend the opening of an exhibition of print and sculpture, and in 1994, she was invited to open the exhibition Arctic Spirit: 35 Years of Canadian Inuit art at the Frye Museum in Seattle, Washington. She also traveled to Ottawa in the fall of 1994 for the opening of Isumavut: The Artistic Expression of Nine Cape Dorset Women. In 2004, she was off to Germany to take part in cultural festivities celebrating the territory of Nunavut, and her contribution to Inuit graphic art. Her major stained glass commission was installed in the fall of 2003 at the John Bell Chapel at Appleby College, just west of Toronto.

In the fall of 2007 Kenojuak traveled to Toronto to attend the launch of Cape Dorset Prints: A Retrospective – a major publication celebrating fifty years of printmaking at the Kinngait Studios. In 2008, she added to her list the Governor General’s Award for excellence in the visual arts. Sponsored by the Canada Council for the Arts, she traveled to Ottawa in March 2008 with her daughter, Silaqi, to attend the exhibition at the National Gallery and events at the residence of the Governor General. She was back in Ottawa in 2009 to participate in events surrounding the 50th anniversary of the Kinngait Studios.

In 2013, after a long illustrious career, Kenojuak died peacefully at home surrounded by her loving family.