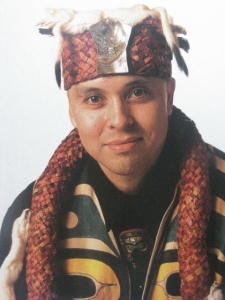 Name:
Kevin Daniel Cranmer – Gwa Gwa Da ’xala (1968 – )
Gender:
Male
Style:
Kwakwaka’wakw
Region:
Pacific Northwest Coast, Canada
Kwakwaka’wakw artist Kevin Daniel Cranmer was born in Alert Bay, British Columbia, but has lived all but four years of his life in Victoria. His father is from the ‘Namgis Nation and his mother is from the Mamlilikala Nation, two of the many Nations of the Kwakwaka’wakw people. Cranmer’s work often speaks to his diverse coastal background, as he can trace his ancestry to the many Nations of Kwakwaka’wakw people as well as the Tlingit of Alaska.

His formal instruction came under the tutelage of his cousin, George Hunt Jr. He later worked with artists Tony Hunt Sr., Tony Hunt Jr., and Calvin Hunt. Kevin’s introduction to larger monumental sculpture began when he first started to work alongside renowned Nuu-Chah-Nulth artist, Tim Paul in Thunderbird Park at the Royal British Columbia Museum. Thus, his large-scale works include several large co-operative projects: a 40 foot pole which stands in Stanley Park, Vancouver; a 36 foot pole carved for the closing ceremonies at the 1990 Commonwealth Games in Auckland, New Zealand and an elaborately carved and painted Chief’s seat for the newly rebuilt Big House in Alert Bay.

Kevin Cranmer is an active participant in the continuation of his cultural heritage through the arts. He is a respected member of his community and is an initiated Hamatsa member, one of the most sacred of the complex and secret dance societies of the Kwakwaka’wakw. His artistic works not only display unique Kwakwaka’wakw traditions but also preserve those traditions for future generations. Kevin Cranmer continues to create pieces for family and for use in ceremony.