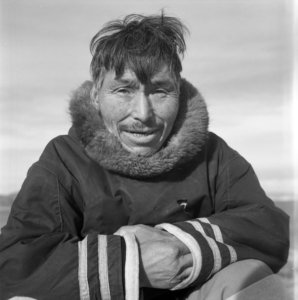 Name:
Kiakshuk (1886 – 1966)
Gender:
Male
Style:
Inuit
Region:
Cape Dorset, Nunavut Territory, Canada
Kiakshuk (Keeakshook) was born in 1886 on the south coast of Qikiqtaaluk (Baffin Island), Nunavut. He would move with his family to the Andrew Gordon Bay area east of Cape Dorset (Baffin Island) in the early 1900s. He died in April 1966.

His son Lukta Qiatsuq is a graphic artist and a well-regarded sculptor who would often interpret his father’s drawings into stonecuts and stencil form. His daughters, Paunichea and Ishuhungitok Pootoogook, were known for their graphic artwork.

It was not until Kiakshuk was in his 70s that he tried drawing and print making due to the encouragement of James Houston. Kiakshuk would become an important participant in the development of Cape Dorset graphic arts creating 52 prints from 1960 until 1966.7 His preferred medium was engraving due to the “direct nature” of the process.

Kiakshuk’s drawings impressed not only southern buyers but fellow Inuit who recognized that he created “real Eskimo drawings” with imagery and stories sourced from his traditional lifestyle and experiences on the land. Kiakshuk was known as an “excellent hunter and trapper” who was well versed in traditional hunting skills and who would become comfortable hunting with a rifle when introduced to it. He was also believed to have been a shaman as a young man.

In addition to his artwork Kiakshuk was admired for his story telling skills. He appeared in a 1958 National Film Board film called The Living Stone where his storytelling skills were featured. Additionally, he was known as a singer of traditional songs. In 1973 he and the Inuit artist Pudlo illustrated a book called Eskimo Songs and Stories, a book of traditional Inuit songs and stories gathered by Knud Rasmussen (1879-1938) during his ‘Great Sledge Journey’.

Kiakshuk’s own stories and experiences of the past about hunting, animals, family and camp life, shamans and spirit creatures, and oral history were the subject of his drawings and sculptures. He also recorded the modern life of Inuit which included stories about topics that ranged from musical instruments and living in wooden houses, as well as important events and creating his own art.

When he died Kiakshuk left behind a legacy of artwork, stories and songs that give Inuit and non-Inuit alike a direct connection with Inuit history and tradition.