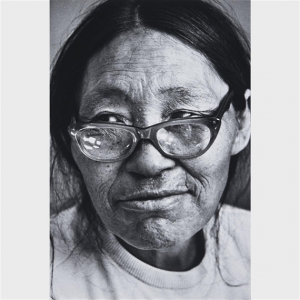 “Born at Itinik camp near Lake Harbor, Northwest Territories, Canada, Kingmeata Etidlooie grew up and spent most of the first half of her life in similar sites along the southwest coast of Baffin Island. She began to carve and to draw in the late 1950s after the death of her first husband, Elijah. As with most Inuit artists of her generation, Kingmeata’s creative endeavors mark a second phase in her life—one that parallels the significant changes experienced by the indigenous people of the Canadian Arctic over the past five decades. With her second husband, Etidlooie Etidlooie (1910-1981), and their family, Kingmeata moved into the settlement of Cape Dorset in the mid-1960s, exchanging a seasonally-based camp life for a permanent residence. Both she and her husband became artist-members of the West Baffin Eskimo Cooperative, recognized internationally for its pritmaking studio and the strength of the graphic artists it represents.

A relatively prolific artist, Kingmeata had more than fifty of her prints published between 1970 and her death in 1989. Her work is characterized by a strong sense of order and structure. Using predominantly simplified animal and bird motifs, she concentrated on the formal rather than narrative qualities of her subjects. However, her most important contribution to Inuit art has probably been her experimentation with media that are more painterly than linear. In the late 1960s to the early 1970s Kingmeata became one of the first Cape Dorset artists to work with watercolors, which had been given to her by Terry Ryan—co-op manager and arts advisor—who recognized the painterly qualities of her drawings. In the mid-1970s the presence of Toronto painter K.M. Graham provided a further catalyst who came North to sketch and work with acrylic paints in her own color-field style. Graham was impressed by Kingmeata’s watercolors and offered her acrylics upon her departure. When a painting studio was established by the cooperative in 1976 Kingmeata, along with Pudlo Pudlat (b.1916), was one of the most committed and enthusiastic users. The rich, saturated colors that were now attainable seemed to mesh perfectly with her formal sense of composition. In works such as “Sea Creatures with Birds”, color, shade, texture, and shape are enmeshed in a delightful, lyrical image.”