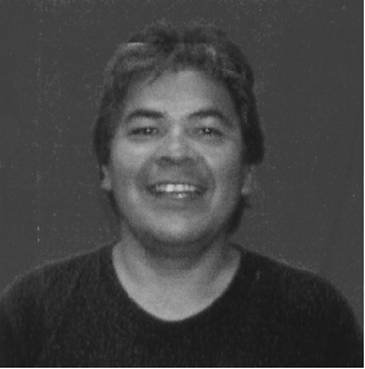 Name:
Leland Bell (1953 – )
Gender:
Male
Style:
Woodland
Region:
Wikwemikong Unceded First Nation
Leland Bell was born in 1953 at Wikwemikong Unceded First Nation on Manitoulin Island, Ontario (Note: the name Wikwemikong means “bay of beavers”); he was raised there and in Toronto and graduated from Laurentian University in Sudbury where he majored in Native Studies. His spirit name is Bebaminojmat, he is of the Loon Clan, and is a “second degree” member of the Three Fires Midewiwin society. An Ojibwa-Odawa, Bell prefers to identify himself as an Anishinabe, an Ojibwa word for North America meaning literally “from whence man was lowered”. He “firmly believes in the notion that Anishinabe culture contains all the necessary paradigms of knowledge to nurture the survival of the Anishinabe people”. As an artist, he believes that the way that “colours, lines, shapes and compositions are perceived” can be understood in the context of that culture. He was one of the young men mentored by members of the Indian Group of Seven at the Manitou Arts Foundation, a summer school that operated on Schreiber Island in 1972. He was deeply inspired by the work of the Woodland artists and with the help of elders has made the connection between the Anishnabe concept of vision quest and his own commitment to living life as a good being.

Leland Bell’s wonderful paintings frequently use stylized human figures sharing the affinity of family or friends, often depicting imagery of nurturing, sharing, learning, peace and serenity. He was influenced in his youth through teachings, ceremonies, and art instruction at Cultural Arts Camps on Manitoulin Island, and it was there that his distinctive style first emerged. Leland has been painting professionally since 1976 and in addition to his painting devotes much of his creative energy to writing and music. He has collaborated often with Shirley Chee Choo and and her husband Blake Debassige on writing music for Shirley’s film projects.

Bell has been part of Group Exhibitions in Ontario, British Columbia and Switzerland. He has had, literally, dozens of commissions, chiefly from organizations in Ontario.

“My art comes from the Three Fires (or Midewiwin) tradition. That is what I believe in. I came to this belief through a dream I had about peace. It was a deeply spiritual experience. After consulting with Elders I began trying to build my sense of spirituality. Then I needed to have an Indian name. I consulted with some elders and asked them to help me find my name. I was given the name Bebaminojmat which, loosely translated, means, ‘when you go around you talk about good things’. Then I fasted to prepare my body and my mind to talk to the Creator. This is where my art comes from.

“The circle is central to our tradition. The Creator sits in the East. Yellow is the colour for that direction; the sacred herb is tobacco; the animal is the eagle. Red is the colour of the South which is the place of all young life, of the little animals; the sacred plant is cedar. The West is the place of life; its colour is black and the sacred medicine is sage. All the healing powers come from the North; its colour is white; sweetgrass comes from there; and that is where the sacred bear sits. “The Circle is what my paintings are based on. The rounded lines are deliberate … what I create is something simple and serene and peaceful.”

All the paradigms that sustain his creativity exist within his Anishinabe culture. He says that he absorbs what he needs and discards what he doesn’t need from other cultures and is committed to remain Anishinaabe. In the same manner that the first wave of Woodlands artists contributed to his life, Leland Bell has also been an art instructor and has conducted numerous workshops and presentations across the continent.

Leland Bells’s work is represented in many prominent art collections in North America and Europe.