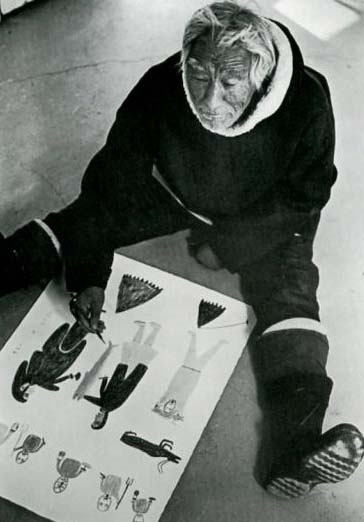 Name:
Luke Anguhadluq (1895 – 1982)
Gender:
Male
Style:
Inuit
Region:
Baker Lake, Nunavut, Canada
Luke Anguhadluq was born in 1895 near Chantrey Inlet into a group of Inuit known as the Utkuhikhalingmiut. Contact between these Inuit and white explorers, traders and missionaries during the 19th century was minimized by the inaccessibility of the Back River area. Brief visits of no more than a few hours made by the men of three Arctic expeditions had no impact on the traditional lifestyle of these inland Eskimos. In spite of increased contact between the two cultures over the next several decades, the Utkuhikhalillgmiut continued to live on the land and struggled to retain as many of their traditions as possible. In the late 1950s, however, their lives were dramatically altered by a famine, which occurred when the migratory routes of the caribou shifted away from the Back River. The famine meant the loss of many lives and the permanent abandonment of the region by the majority of the survivors, including Anguhadluq and his extended family. Most moved into or nearer established settlements. Anguhadluq had established a reputation as a great camp leader and a successful hunter. When he moved into Baker Lake in 1961, he look up a new profession as an artist, in which he expected similar success. As Jack Butler, the crafts officer at Baker Lake from 1969 to 1972, says, “Anguhadluq was a real patriarch. He assumed that if he did drawings they would be significant. He was amused that we took such an interest but not entirely amused. He expected to be respected.'”

Anguhadluq’s career as a graphic artist began in 1960, when he was 65. He may well have been encouraged to draw at this early stage in the development of the Baker Lake arts and crafts industry by the success of his cousin, Jessie Oonark. In his drawings, the ratio of the much smaller positive pictorial motif to the more expansive, negative background space represents the actual experience of the lnuit, surrounded by the vast open space of the Arctic. Almost immediately after Anguhadluq received larger sheets of drawing paper in 1970. He adjusted the figure-to-ground relationship in his imagery. Representations of human figures, animals, or an exchange between the two, were enlarged and centered on the page. The tension of the early drawings, between small pictorial motifs and the large surrounding areas of empty space, was replaced by a much more balanced interaction between the two elements.