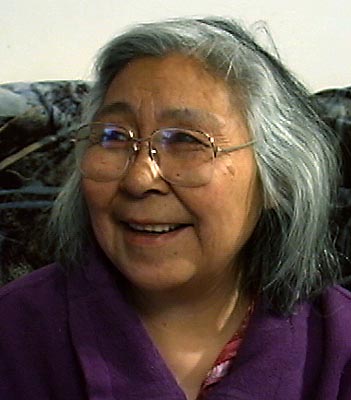 Name:
Mabel Nigiyok (1938 – ) RCA
Gender:
Female
Style:
Inuit
Region:
Holman, North West Territories, Canada
Mabel Nigiyok began learning stencil printmaking in the Holman printshop in 1981, and her work was published the following year. She has since become one of its most productive artists and printmakers, with 63 of her drawings produced as prints. She has printed 39 works, many of them her own.

Nigiyok was born in the Cook River area, and her family made seasonal trips between the Minto Inlet coastline in winter and the inland lakes and rivers in the summer. Her family didn’t move into Holman until the school was built in 1966. While still living on the land she began sewing sealskin mats for the Co-op.

In her Introduction to the 1994 print catalogue, Nigiyok described her artistic beginnings:

In 1981 I started working at the print shop…. Elsie Klengenberg and I were working together. We didn’t have any training, we learned by watching other people working and finishing up their work which was supposed to be done. At that time there were no shadings on the prints. Elsie and I would discuss how to put shadings on them and it was the first time there was a change on the prints. When I first started working I used to do other people’s drawings. I started drawing on my own. I’d draw what my parents went through long ago.

The significant formal change that took place in Holman prints in the early 1980s was the result of the artists’ decision to abandon the stonecut technique for prints. Environmental concerns about dust made stencil printing a more attractive and feasible alternative. The 1980/81 collection included eleven stencil editions. That number increased to 17 by 1986. The simple stencil technique developed in the early 1980s was refined by the mid-1980s to allow for subtle tonal gradations from light to dark, creating three-dimensional illusions within the narrative space of the prints. This has become a hallmark of the Holman style, as seen in the work of Mabel Nigiyok, Elsie Klengenberg, Mary K. Okheena and Susie Malgokak.

Nigiyok is inspired by the stories she heard from her parents and grandparents. Like Agnes Nanogak Goose, she has a tremendous capacity to recall and represent these stories in great detail, as evidenced by her description of the story for her 1989 print, The Death Game. Her works are inspired by her early life on the land.