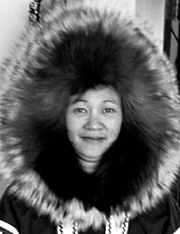 Name:
Mary K. Okheena (1957 -)
Gender:
Female
Style:
Inuit
Region:
Holman, North West Territories, Canada
Mary K. Okheena has worked for the Holman print shop since 1977, longer than any other artist or printer currently working. To date, 74 of her drawings have been made into prints, and she printed 36 of these herself. She has also printed 31 drawings by other artists.

Okheena was born at the old townsite of King’s Bay in 1957 to parents, Jimmy and Nora Memorana. Her father, who was born in the Tuktoyaktuk area, was orphaned by a flu epidemic as a child. His uncle Billy Banksland, the father of Agnes Nanogak Goose, adopted him. Nora Memorana, from the Minto Inlet area, was also orphaned by a flu epidemic and adopted by an uncle. Both Jimmy and Nora Memorana are respected drum dancers who have taught their skills to younger generations.

Okheena learned English at Charles Camsell Hospital, Edmonton, where she was treated for tuberculosis for two and a half years as a young child. She was always interested in drawings, having watched her father, Jimmy Memorana, one of the founding members of the Holman Co-op, and her aunt, Agnes Nanogak Goose make their work. After Mary made some initial drawings and a large embroidery design for the church, Father Tardy invited her to help with stencil printing for the print shop.

I learned things from all the artists. It was almost like a family. There was Elsie Klengenberg, Mona Ohoveluk, Harry [Egotak], Mabel Nigiyok, Peter Palvik. We would talk about each of the drawings, what it meant, what it meant to a printer and to an artist. Everyone had their own techniques of printing, and I learned by watching.

Mary’s involvement with the print shop was intermittent from 1977 to 1982, the period during the birth and infancy of her two oldest children. In 1982, she resumed her artwork with a more sustained focus, and in 1986 she printed three of her own drawings. Okheena is often inspired by the facial expressions of children and the challenge of interpreting these and other human subjects in her work. She does not reproduce the traditional stories that she heard as a child, noting that she never heard the end of the bedtime stories because she fell asleep before the stories ended. Okheena has developed her own form of narrative storytelling. Her scenes with human figures are full of humor and movement, at times bursting from the bounds of the paper as in Shaman Dances to Northern Lights. Several works, such as My Ancestors Were Here, use culturally symbolic images, such as the inukshuk, as an organizing motif for the composition. With the stark black and white woodcut, Bear Tracks, Okheena reveals her skills as a designer. The clever interplay of negative and positive space is integrated within a complex interplay of line and form.