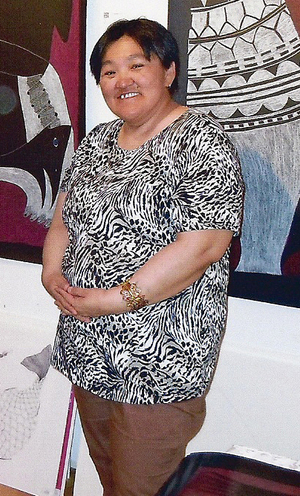 Name:
Ningeokuluk Teevee (1963 – )
Gender:
Female
Style:
Inuit
Region:
Cape Dorset, Nunavut Territory, Canada
Born May 27, 1963, Ningeokuluk is the daughter of Joanasie Salomonie (deceased) and his wife Kanajuk. Her father, Joanasie, was much loved in Cape Dorset for his sense of humour, mischief and compassion. Ningeokuluk works full-time for the department of Housing in Cape Dorset, and devotes her spare time to her family and whatever time she can to her drawing, which she does at home. Her husband, Simeonie Teevee is a musician and plays with his band at community events in Cape Dorset and at music festivals around Nunavut.

Ningeokuluk is one of the most versatile and intelligent graphic artists to emerge from the Kinngait Studios. In the the fall of 2009, Ningeokuluk’f first children’s book was published by Groundwood Books (A divishion of House of Anasi Press). Entitled Alego, it is an Autobiographical story of a young girl named Alego who goes clam-digging with her grandmother for the first time and, along with the way discovers all the wonders of the seashore. The book was short-listed for the Governor General’s Literary Award for children’s illustration.

Since her first prints appeared in the collection in 2004, Ningeoluluk has been on of Kinngait’s studio’s most celebrated artists. She has a comprehensive knowledge of Inuit legends and a fine sense of design and composition. These elements that have made many of her prints highly sought after by collectors. Ningeokuluk has had numerous solo shows of her bold and resplendent drawing and some of her work has been featured on exhibitions in major public galleries and museums.