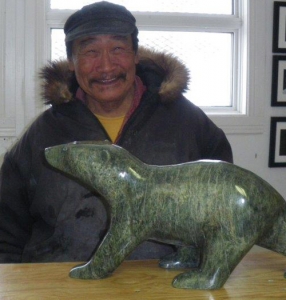 Name:
Nuna Parr (1949 –  )
Gender:
Male
Style:
Inuit
Region:
Cape Dorset, Nunavut Territory, Canada
Nuna was born near Cape Dorset and lived with his adoptive parents, the graphic artists Parr and Eleeshushe. The family moved to Cape Dorset in 1960, after Parr was injured in an accident, and the young Nuna started carving while he was still in school. His interest in hunting and his regard for the animal life of the Arctic are directly reflected in his work. His rounded forms have great movement and a natural flow with the grain of the stone, as if both were made for each other. He has been carving for forty years, and his work continues to be shown nationally and internationally.