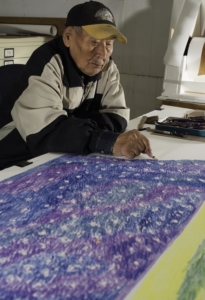 Ohotaq began drawing in the early years of the print program in Cape Dorset, and his print, “Eskimo Fox Trapper” was released in 1961. He became less involved with drawing as the community grew, working instead for various community agencies in full-time wage employment. Since his recent retirement from his job as a caretaker of the Peter Pitseolak School in Cape Dorset, Ohotaq has again expressed an interest in drawing. We are pleased to include three of his prints in this anniversary collection released in 1999. Since then he has become a fixture at the table in the Kinngait Studios, working on drawings covering a wide range of themes and subjects, including an illustrated life history.

The Annual Print Collection of 2001 includes three lithographs by Ohotaq, all enhanced by the technique of chine colle. This involves pressing a thin sheet of sized Oriental paper to a heavier backing sheet and printing it at the same time which adds another dimension of colour and texture to the final image. His image entitled, “Three Ravens”, 2001 – 2005 is featured on the cover of this year’s catalogue.*
Ohotaq had his first solo exhibition of prints and drawings on 2010, and in 2012 a number of his large scale drawings were exhibited in a highly acclaimed alongside venerable Canadian artist Jack bush at the Justina M Barnicle Gallery at the University of Toronto.
*West Baffin Eskimo Co-operative, 2001.