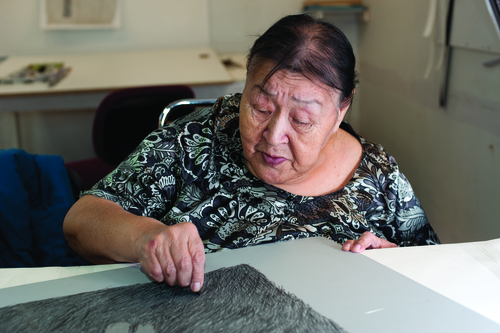 Name:
Papiara Tukiki (1936 – 2014 )
Gender:
Female
Style:
Inuit
Region:
Cape Dorset, Nunavut Territory, Canada
“I enjoy drawing animals and I’m amazed at how they survive up here in the north. Without them, my family would never have survived. I also draw people camping because I am reminded of old times when we lived on the land. Those were good times.”

Papiara Tukiki was born in 1942 at Nuwata, an outpost camp on Foxe Peninsula. She is a long time resident of Cape Dorset and a regular and prolific participant in the Co-op studios. Papiara states, “I remember how it was before we lived in the settlement. We needed all of these animals for food and clothing and just to live. I like to draw them. I also like to draw the way that we used to live, people in camps and travelling. Sometimes I just draw something that I thought of which is not real.” For artists like Papiara this is actually a lived reality unlike the younger artists that she works alongside. The renaissance here, however, is seen in the renewed determination of these artists. These elders remain steadfast producers in the Co-op, working together with the younger generation. They embrace the large format offered to them, opening up their work to a more invigorated working of pencil crayon, colour and size. Images of wildlife, camp life, and landscape now push the boundaries of the paper.

The work of Papiara is iconic, presenting polar bears and caribou, lemmings and sea bugs, in the graphic simplicity we know as “Inuit art”. The beauty and strength of her depictions lies, however, in their charm. Her beautiful botanical drawings of plant life of the sea, seldom seen in graphics, become fanciful compositions of shapes and shades of green. Likewise, her animals and insects are endearing. These are not scientific depictions of wildlife but memories of a life once lived and remembered. The large works of a polar bear, caribou and a wolf are more teddy bear-like than savage and ominous. It recalls not a savage past but a sentimental one.