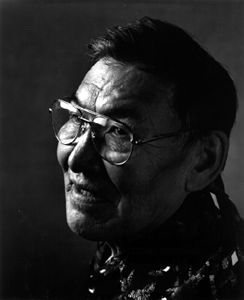 Name:
Pauta Saila, RCA (1916 – 2009)
Gender:
Male
Style:
Inuit
Region:
Cape Dorset, Nunavut Territory, Canada
Pauta was born in the camp of his father, the tribe leader Saila, at Kilaparutua near what is now Cape Dorset. He grew up on the land and began carving as a teenager, making implements and tools from ivory. Later, he carved narrative camp and hunting scenes. Pauta moved to Cape Dorset after marrying his second wife, Pitaloosie, and by the early 1960s he was contributing to the annual print release. His work was in the famous 1971-73 “Sculpture/Inuit. Sculpture of the Inuit: Masterworks of the Canadian Arctic” exhibition that toured the world. He was one of the first to see the strengths of developing an idiosyncratic, personally autographic style. Although he has worked on a wide variety of themes during his career, he is most famous for his depictions of dancing bears. After a lifetime of exhibitions and accolades, Pauta was elected to the Royal Canadian Academy in 2003.