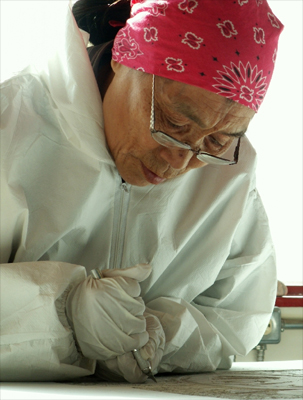 Name:
Philippa Iksiraq (1944 -)
Gender:
Female
Style:
Inuit
Region:
Baker Lake, Nunavut, Canada
Philippa and Thomas Iksiraq are among the founding members of the Baker Lake Printmaker’s Co-Operative in Nunavut. Their images speak to the contemporary challenges faced by the Inuit people as they stand at the brink between a nomadic way of life that was tied closely to the land and a lifestyle heavily influenced by Western values and ways of living. Through their practice, Thomas and Philippa seek to maintain their history and culture for the next generation of Inuit people and to tell their stories to the world.

The Iksiraqs’ work combines traditional subject matter with images of contemporary life in Baker Lake. They have witnessed the impact of drastic cultural change to the Inuit people as mining, industry and Western traditions took over a way of life that had been tied harmoniously to the land for thousands of years. This changing way of life is evident in their images. The Inuit legends and contemporary scenes appear in black ink against a pristine featureless white ground, reflecting the stark environment of the far north, yet the traditional motifs of the legends are often combined with signs of the Westernization of the community. Yet this depiction of the shift in a way of living is natural to a form of art that is itself interconnected with all aspects of life. Floating spirits, mythic forms and animals are intermingled with scenes from daily activities further indicating the interconnection between the spiritual world and the day-to-day life.

Working in the Baker Lake Printmakers Co-operative studio since its inception as both “artists” and “printers”, Thomas and Philippa Iksiraq cut relief images into stones to be printed for their own drawings as well as cutting stones to print the drawings of other artists in the community.

Thomas and Philippa’s work seeks to document and communicate the profound cultural changes to the Inuit way of life and to tell their stories to future generations. They state that they began drawing as a way to remember their own lives and to be able to tell future generations how they once lived. They want to tell their story to the younger generations of Inuit people and to the people living in southern Canada so they too can glimpse a way of living in harmony with the land even in one of the harshest climates on earth. Through print media Thomas and Philippa are enabled to communicate their important message to others in Canada and throughout the world.