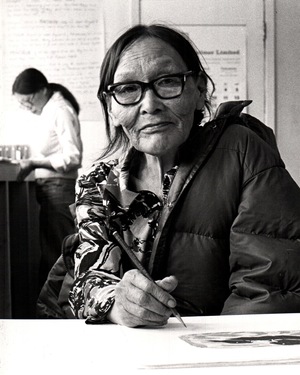 Name:
Pitseolak Ashoona, RCA OC (1904-1983)
Gender:
Female
Style:
Inuit
Region:
Cape Dorset, Nunavut Territory, Canada
Pitseolak was the mother of several Cape Dorset artists, the Ashoonas: Ottochie, Koomwartok, Kaka, and Kiawak; and Napatchie Pootoogook. She is a member of the Order of Canada and was elected to the Royal Canadian Academy of Arts in 1974.

Pitseolak was among the first in Cape Dorset to begin drawing, and the most prolific.  She made close to 9,000 drawings during her 20 years in Cape Dorset. Her prints have appeared in every annual print collection since her work was first published in 1960.  Her best and most authentic drawings were of “the old Eskimo ways”, a way of life deeply embedded in her memory. Pitseolak was been awarded several honors over the years, and her work has been the subject of several projects.  In 1971 the National Film Board produced a film based on her book, “Pitseolak: Pictures out of my life”.  Pitseolak died in 1983 and is buried behind the Anglican Church in Cape Dorset.  She fulfilled her promise to work on her drawings and prints until she was no longer able.  Her vast legacy of original work now resides on long term loan at the McMichael Canadian Art Collection where it is being photographed, documented and exhibited.*
*West Baffin Island Co-op, 1999.