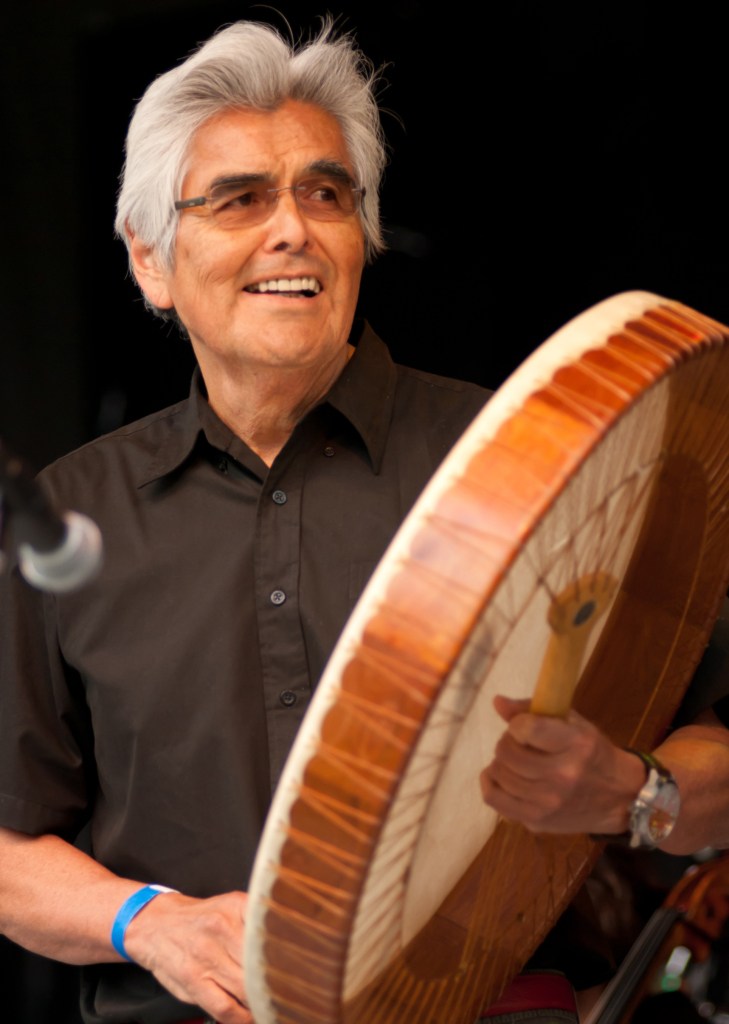 Name:
Robert Davidson (1946 – )
Gender:
Male
Style:
Haida
Region:
Pacific Northwest Coast, Canada
Robert davidson is one of canada’s most respected and important contemporary visual artists. A northwest coast native of haida and tlingit descent, he is a master carver of totem poles and masks and works in a variety of other media as a printmaker, painter and jeweler. He is best known as an impeccable craftsman whose creative and personal interpretation of traditional haida form is unparalleled. His distinctive style is appreciated by the haida community and contemporary arts scholars alike, with many of his works considered post-modern masterpieces. His work is sought by collectors internationally.

Davidson’s passion to revive and perpetuate a variety of forms of Haida cultural expression, including song, dance and ceremony, has fueled his remarkable output throughout the years. He has been responsible among other things for carving and raising the first totem pole in his hometown of Massett in nearly 90 years when he was just 22 years old. His inspiration was to give his elders a chance to celebrate in a way they had not been able to in their lifetimes.

Davidson was born November 4, 1946 to a particularly notable family of artists. His great grandfather was the famed Haida artist, Charles Edenshaw (1839 – 1924) whose superb artworks were well known in the Haida community and also collected and displayed in showrooms internationally, during the era before Haida culture was painfully silenced by the government.

While he was growing up, the art of his culture had virtually disappeared from view in Massett, but from an early age, Robert was surrounded by fine carving as both his father, Claude Davidson and grandfather, Robert Davidson Sr. were respected carvers. Robert began carving at the age of 13 when his father insisted he carry on the family artistic tradition.

Because his local school did not offer all the grades necessary to graduate from high school, in 1965, Robert moved to Vancouver to complete his education at Point Grey Secondary School. In an ironic way, this move allowed him to learn more about the arts of the Haida Nation, as he was able to visit the Vancouver Museum to see stunning artworks that had been collected from Haida Gwaii.

In 1966, while demonstrating his carving work at Eaton’s in Vancouver, Davidson met the late Bill Reid, who then coached him on sculpture and design for the next eighteen months. Through Reid, he met anthropologist Wilson Duff, artist Bill Holm and continued to learn about the Haida art. In 1967 he enrolled in the Vancouver School of Art (predecessor to the Emily Carr University of Art and Design), a place he credits for developing his drawing.

For more than fifty years now, Robert Davidson has worked as an artist and has produced an internationally acclaimed body of work. His work is found in a number of private and public collections including the National Gallery of Canada in Ottawa, the Vancouver Art Gallery, the Canadian Museum of Civilization in Hull, Quebec, the Southwest Museum in Los Angeles.

He has also received many honours for his accomplishments. In 1995 he received the National Aboriginal Achievement Award for his contribution to First Nations art and culture. He holds numerous honourary degrees. He has received the Order of British Columbia, and in 1996 was awarded the prestigious Order of Canada, and received both the Governor General’s Award for Visual Arts and the Audain Prize for Lifetime Achievement Award in the Visual Arts in 2010.

He is a leading figure in the renaissance of Haida art and culture and is a founding member of The Rainbow Creek Dancers with his brother, Reg Davidson. He is also one of the founding members of the Haida Gwaii Singers Society, started by Terri-Lynn Williams-Davidson.

Davidson’s Haida name is: Guud San Glans which means Eagle of The Dawn. He currently lives and works in White Rock near Vancouver and Massett in Haida Gwaii.