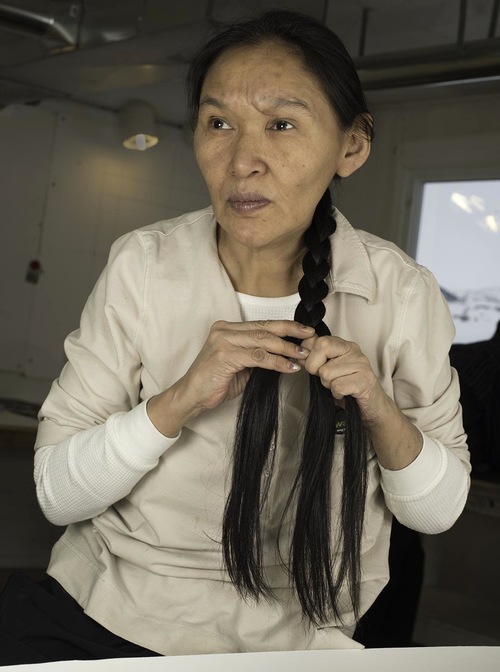 Name:
Shuvinai Ashoona (1961 -)
Gender:
Female
Style:
Inuit
Region:
Cape Dorset, Nunavut Territory, Canada
When I start to draw I remember things that I have experienced or seen. Although I do not attempt to recreate these images exactly, that is what might happen. Sometimes they come out more realistically but sometimes they turn out completely different. That is what happens when I draw.

Shuvinai was born in Cape Dorset in August, 1961. She is the daughter of Kiawak Ashoona and Sorosilutu, both well known for their contributions to the arts in Cape Dorset.

Shuvinai began drawing in 1996. She works with pen and ink, colored pencils and oil sticks and her sensibility for the landscape around the community of Cape Dorset is particularly impressive. Her recent work is very personal and often meticulously detailed. Shuvinai’s work was first included in the Cape Dorset annual print collection in 1997 with two small dry-point etchings entitled Interior (97-33) and Settlement (97-34). Since then, she has become a committed and prolific graphic artist, working daily in the Kinngait Studios

Shuvinai’s work has attracted the attention of several notable private galleries as well as public institutions. She was featured along with her aunt, Napachie Pootoogook, and her grandmother, the late Pitseolak Ashoona, in the McMichael Canadian Collection’s 1999 exhibition entitled