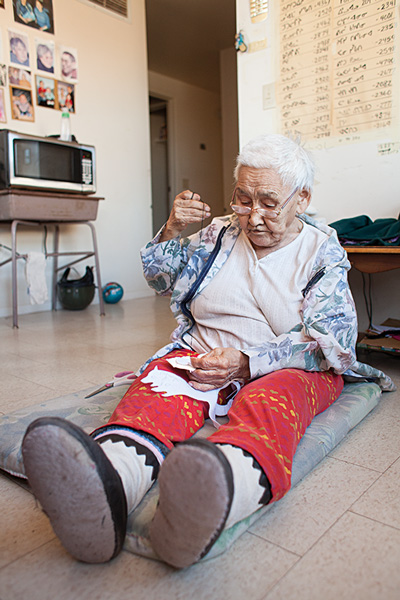 Name:
Victoria Mamnguqsualuk (1930 – 1991)
Gender:
Female
Style:
Inuit
Region:
Baker Lake, Nunavut, Canada
“Victoria Mamnguqsualuk is one of the best-known Canadian Inuit artists of her generation. Born near Garry Lake, Northwest Territories, she lived a migratory existence on the land until she was in her early thirties. Because of widespread disease and famine in the hunting camps of the Barren Lands region, Mamngushualuk and her family, like many Inuits, moved to Baker Lake in 1963. Mamngushualuk is the daughter of Jessie Oonark (c.1906-1985), one of the best known of all Inuit artists. Both mother and daughter became active in the artistic co-operative at Baker Lake.

“As a second generation Inuit artist to live in the settlements, Mamngushualuk’s art has been somewhat influenced by her exposure to images from the outside world. More than some of her predecessors she uses the conventions of European art in her depictions of three-dimensional space and sequential action. Her work is characterized by its complex scenes involving multiple figures and vigorous activity. Mamngushualuk is particularly interested in the depiction of Inuit myth.”