Françoise Oklaga was the sister of Cape Dorset artists Pudlo and Ooshutsiak Pudlat, but she was adopted at an early age and grew up in the area of Chesterfield Inlet. In 1975 she moved to Baker Lake and was intrigued by the active art scene in the community. Over 15 years she created many original works on paper, although only a few were rendered into prints for the annual Baker Lake print collections in the 1980s.

Born near Garry Lake in the Central Canadian Arctic, Hannah Kigusiuq grew to adulthood living much the same as her Inuit ancestors had before her—residing in snow houses in the winter and skin tents in the summer. Married as a very young woman, Kigusiuq remembers travelling on the land and following the Arctic game animals in order to survive.

Qarliksaqls parents, Utak and Qajaviniq, were Hanningajuqmiut from Hanningajuq, located 150 miles northwest of Baker Lake. Urak and Qajaviniq also travelled in search of caribou and fish in the Akiliniq area. Qarliksaq married Martha Apsaq ([930-1995), who became a talented textile artist known for her embroidered wall hangings. 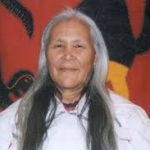 Born in 1941 in the Kazan River area, Avaalaaqia moved to Baker Lake in 1958, where she still lives. Avaalaaqiaq is one of this country’s most prominent Inuit artists and a leading member of the prolific artistic community of Baker Lake in the new Canadian arctic territory of Nunavut, has enjoyed a distinguished thirty-year career. 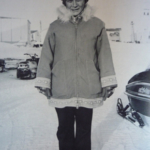 Janet Kigusiuq is best known for her graphics but has also gained significant recognition in the medium of fabric art. She was born in the Back River area of the Keewatin region of the Northwest Territories and is the eldest daughter of Jessie Oonark. Oonark was one of Baker Lake’s—and Canada’s—most distinguished artists. 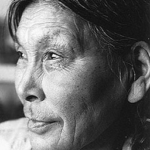 Jessie Oonark, “Una,” OC, artist (born 1906 in the Back River area, NWT [now Nunavut]; died 2 March 1985 in Churchill, MB). Jessie Oonark was elected to the Royal Canadian Academy of Arts in 1975, and was awarded the Order of Canada in 1984. In 1987 the Art Gallery of Ontario presented a major retrospective of her work and her largest work, Untitled (1973) (a wool and felt piece, four by six metres) has hung intermittently ever since in the foyer of the National Arts Centre in Ottawa. 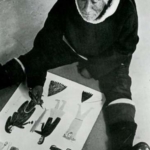 Luke Anguhadluq was born in 1895 near Chantrey Inlet into a group of Inuit known as the Utkuhikhalingmiut. Contact between these Inuit and white explorers, traders and missionaries during the 19th century was minimized by the inaccessibility of the Back River area. Brief visits of no more than a few hours made by the men of three Arctic expeditions had no impact on the traditional lifestyle of these inland Eskimos.

Marion Tuu’luq is known primarily for her textile works but also produced graphic works, contributing to 13 editions of the Baker Lake print collection. Her work is tied to her homeland and her experiences of life as an Inuit person. Notably she began her artistic practice late in life, using the practical sewing skills she had learned as a child as a basis for her creative output. 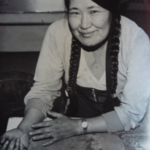 Marjorie Esa was born near Iglulik and adopted as newborn child by Louis Tapatai and Hahha Siksik who were living in the area near Baker Lake. Tapatai worked and travelled regularly with Hudson Bay Company traders and therefore Marjorie grew up in close contact with both her Inuit traditions as well as with Euro-Canadian influences that were later introduced in the Arctic culture later.

Ittuluktnak’s work has been exhibited nationally and internationally and is found in the collections of the Canadian Museum of Civilization, Winnipeg Art Gallery, the MacDonald Stewart Art Center and the Prince of Wales Northern Heritage Centre, Yellowknife. 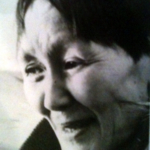 Myra Kukiiyaut was born in Baker Lake, Northwest Territories, Canada, where her father worked for the Royal Canadian Mounted Police, but was raised on the land where she lived a traditional nomadic existence subsisting on caribou and fish, living in an igloo in winter and a caribou skin tent in summer. 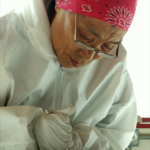 Philippa and Thomas Iksiraq are among the founding members of the Baker Lake Printmaker’s Co-Operative in Nunavut. Their images speak to the contemporary challenges faced by the Inuit people as they stand at the brink between a nomadic way of life that was tied closely to the land and a lifestyle heavily influenced by Western values and ways of living. 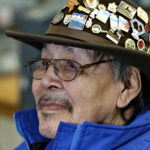 My name is Simon Tookoome, I live in Qamanittuaq, Baker Lake. I am originally from Uqhuqtuuq, Gjoa Haven. I moved as a young lad to Baker Lake. I first got into hand drawings in 1970. I would take my drawings to the print shop and the buyer would rip them into pieces. Out of five drawings, only two were bought and the rest were torn to shreds in front of my face. It hurt me immensely, but I recalled my mother always told me not to be upset even if people were bad to me. 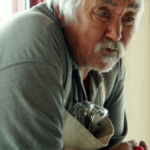 Thomas was born in October 23rd in 1941 in the Back River area. His father, Mark Oyarai, died in the spring of 1954. “When I was 6 or 7 I would follow my dad out hunting. I would go about 5 miles. I would watch to see what he did and how he did it. That is how I learned. I got my first caribou when I was 9 years old. It was in 1950 and I was out hunting with my cousin who had been adopted by my mother and father. I got the caribou with my .22 rifle. I remember feeling great afterwards, that, ‘Now I am a hunter! 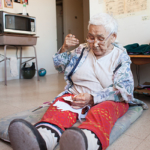 Victoria Mamnguqsualuk is one of the best-known Canadian Inuit artists of her generation. Born near Garry Lake, Northwest Territories, she lived a migratory existence on the land until she was in her early thirties. Because of widespread disease and famine in the hunting camps of the Barren Lands region, Mamngushualuk and her family, like many Inuits 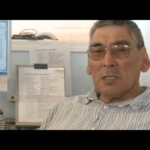 William began carving and drawing in 1963 and has devoted himself to graphic art since 1970. Typical of his drawings are the depiction of skeletons and internal organs of shamans and animals. In addition to his art work, William enjoys hunting and fishing and has been active in community affairs.

Winnie Tatya began drawing, and in the early 1970s she began making wall hangings. Her fabric work has been in many exhibitions since 1974, including the international touring show Northern Lights: Inuit Textile Art from the Canadian Arctic, organized by the Baltimore Museum of Art in 1995. In this early work, she has used a sewing stitch of her own invention: a long feather or Cretan stitch, tightly worked to completely cover the appliquéd felt forms. The result is a slightly raised image, with solid bands of evenly spaced coloured threads. Non-naturalistic, geometric designs have been used for the figures and animals at the top, and variegated embroidery floss contributes to a three-dimensional appearance.