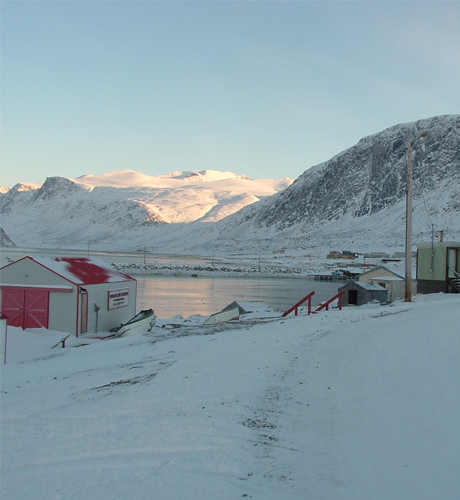 Pangnirtung means “the place of the bull caribou” in Inuktitut. It is located on a narrow coastal plain against a spectacular backdrop of high mountains and a winding river valley, and is surrounded by spectacular fiords.

Legend has it, that a hunter named Atagooyuk gave the place its name well over 100 years ago, when caribou had not yet changed their patterns as a result of the incursions of man.

The last few decades, though filled with promise, have been fraught with difficulties for the people of Pangnirtung. This was a seal-hunting community, and when sealskin prices declined sharply in the 1970s and 1980s, hunting became uneconomical. With substantial government assistance, the community currently operates a turbot fishery.

The government has also encouraged the development of arts and crafts, including a unique weaving industry, art prints and clothing items. Pangnirtung sculpture, like that of Iqaluit, exhibits a certain heroic realism in its animal and human subjects. Stone is the most widely used material, but whalebone is also popular. Many artists from this community enjoy working on a large scale in their portrayals of dramatic and emotionally charged shamanic or mythological images.

Art from Qikiqtarjuaq (formerly Broughton Island) is similar to that of Pangnirtung, as a result of families moving back and forth between the two communities. Sculptors utilize whalebone, light green, and occasionally, dark green to black stones.