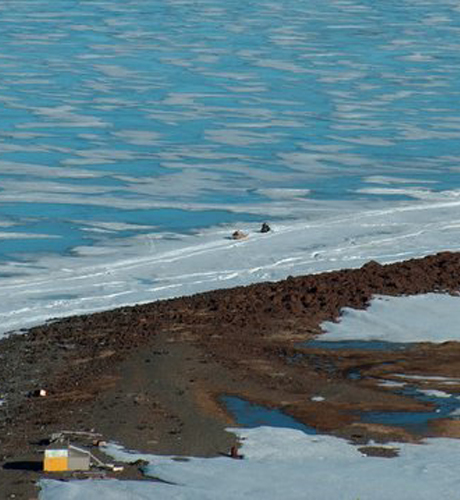 Ulukhaktok (formerly known as Holman until April 1, 2006) is a small hamlet, located on the west coast of Victoria Island in the Northwest Territories, where the population is 90% Inuvialuit or Inuit, is also home to a variety of animals, birds and fish. The terrain is very hilly with steep bluffs and cliffs.

Ulukhaktok, in Inuktitut, means “the place where ulu parts are found”. Slate and copper from this region were traditionally used to create the ulu, which is a semi-lunar shaped knife used by women for preparing animal skins to make clothing and for food preparation.

Ulukhaktok is well-known for traditional Inuit Art and Print making. Holman art prints have a very distinct style and are marked with the well-known ulu symbol. Prints are made using stencils, stonecuts, linocuts and lithography. The works of Mary Okheena have gained international recognition.

The community is also known for the world’s most northern golf course, hosting the Billy Joss Open Celebrity Golf Tournament each summer.