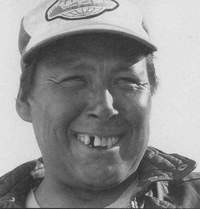 Name:
Enookie Akulukjuk (1943 – 2006 )
Gender:
Male
Style:
Inuit
Region:
Pangnirtung, Nunavut, Canada
Enookie Akulukjuk, master printmaker and annual participant in the Pangnirtung Community Print Collection since 1985, passed away in hospital in Ottawa in mid-December 2006, after a long battle with heart disease. Enookie was born in 1943 in Illunganjuit (Bon Accord), a small community that no longer exists, on Baffin Island. The son of Malaya Akulukjuk, one of Pangnirtung’s most famous artists, he resided in Pangnirtung since 1964. Enookie was among the first printmakers to take up the art after it was introduced in Pangnirtung in the early 1970s. His early printmaking experiences were in the medium of silkscreen. Over the years he also produced a number of beautiful etchings, mastering this technique that utilizes copper and zinc plates. Ultimately, Enookie became a specialist in stencil printing, or pochoir, a technique that he enjoyed for its easy handling and simplicity of design. His stencil prints are characterized by a high level of technical virtuosity, demonstrating smooth, even brush work, softly blended colours, and a level of mastery that he achieved through over thirty years of printmaking experience.

As with most of the Pangnirtung printmakers, many of Enookie’s prints are interpretations of original drawings produced by various community artists, including those of his common-law wife and founding chairperson of the Uqqurmiut Inuit Artists Association, Rose Okpik. However, he also regularly created his own original imagery, capturing the playful movements of wildlife, such as seals and birds, with his use of a repetitive patterning technique. Enookie was also a skilled woodworker and participated in the hand-carved signmaking program at the Uqqurmiut Centre for Arts & Crafts. Examples of his wood-carving skill presently adorn building exteriors in various communities in Nunavut. Enookie Akulukjuk also lived for hunting, fishing and camping on the land, especially during the spring and summer seasons. All his life, he retained strong memories of his experiences from a time before settlement in communities like Pangnirtung became the norm. With his charming, gentle personality and ready, warm smile, Enookie was a wonderful presence in the print shop. Enookie Akulukjuk is survived by four brothers and four sisters, and he is greatly missed by all who knew him.