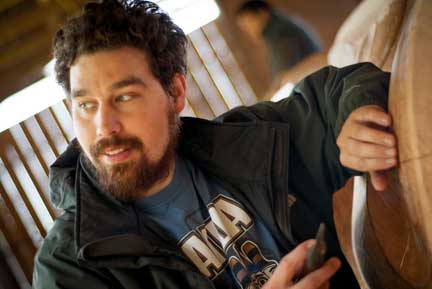 Name:
Jaalen Edenshaw (1980 – )
Gender:
Male
Style:
Haida
Region:
Pacific Northwest Coast, Canada
A member of the Ts’aahl – Eagle Clan of the Haida Nation, Jaalen was born in 1980 in Masset, Haida Gwaii. He left Masset at 16 to finish highschool and then received his B.A. in Political Science from the University of Victoria in 2003. He then returned home to Haida Gwaii with his wife Amanda where they now live with their two daughters and son.

Jaalen has always been surrounded by Haida Art. At 13, he started studying different Haida works and began learning formline design. Jaalen worked under Guujaaw and Jim Hart on various projects including several totem poles, the smithing of Copper Shields, and the building of a 35 foot canoe. He owes his understanding of the art to these experiences.

Mask carved in cedar
He has been featured in many different gallery shows and exhibitions, most notably the 2006 “Raven Traveling” show of Haida Art at the Vancouver Art Gallery. He also co-wrote and produced “Sinxii Ganguu”, a Haida theatrical production of a traditional story. Most recently, Jaalen completed two monumental totem pole projects: the 45 foot Two Brothers Pole in Jasper carved with his brother Gwaai in 2011, and the 42 foot Gwaii Haanas Legacy Pole raised in Windy Bay in 2013 to celebrate the 25th anniversary of the creation of Gwaii Haanas.

Jaalen’s work is inspired by the old Haida stories and the daily living of his culture. The preservation of Haida language is very important to him. He and his family are dedicated to learning their language.